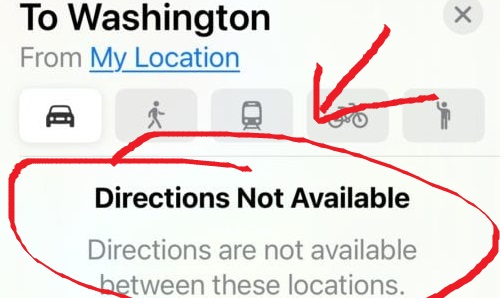 As many as two million Americans are expected to descend on our nation’s Capitol in Washington DC tomorrow for a pro-Trump, Stop the Steal rally. But what happens in the day and age when paper maps are obsolete, and Apple Maps is allegedly blocking directions to Washington DC for millions of users? Is this an accident—or just another “glitch,” like the voting glitches and “irregularities” we saw in 6 critical swing states late in the evening on Nov. 3rd and into the wee hours of the following morning? Isn’t it a bit ironic that the millions of Americans coming to DC to protest could now be experiencing a “glitch” that prevents them from accessing directions to the protest?

Conservative syndicated radio host Todd Starnes was one of the first to tweet a screenshot from his phone, showing what it looks like when an Apple iPhone user asks for directions to Washington DC.

Very odd – in advance of the big DC Trump rally – Apple Maps has blocked directions around the nation’s capital. pic.twitter.com/NOGEDJSOzc

Kyle Wooten, a member of the Trump administration, tweeted: Apple Maps won’t show you how to get to DC ahead of Trump’s rally tomorrow, confirmed:

Apple Maps won’t show you how to get to DC ahead of Trump’s rally tomorrow, confirmed: pic.twitter.com/JTKAxyrVlV

We tested this ourselves from our current location, and sure enough, directions to Washington DC are unavailable:

Meanwhile, directions to Baltimore are readily accessible on my iPhone:

And if I want to go to New York (hypothetically, of course, because no one in their right mind wants to go to the Communist-ruled, locked down, violent city of New York right now), Apple Maps is happy to show me the way:

This user had to usurp Apple technology to find directions to DC:

Hey ⁦@Apple⁩ ⁦@AppleSupport⁩, WHAT IN THE FUCK IS THIS SHIT! I DIDN’T PAY $1,500 A FUCKING iPhone 12 MAX PRO TO BE TREATED LIKE A FUCKING CHILD! I EXPECT THIS SHIT TO BE RECTIFIED ASAP OR THIS WILL BE MY LAST iPhone, AND I’VE BEEN BUYING THEM YEARLY SINCE 2009! pic.twitter.com/5lifj4VfHd

UPDATE: Around 5:00 PM EST, directions to Washington DC were restored on Apple Maps.