Doctor Explains Why You MUST Refuse The Vaccine. 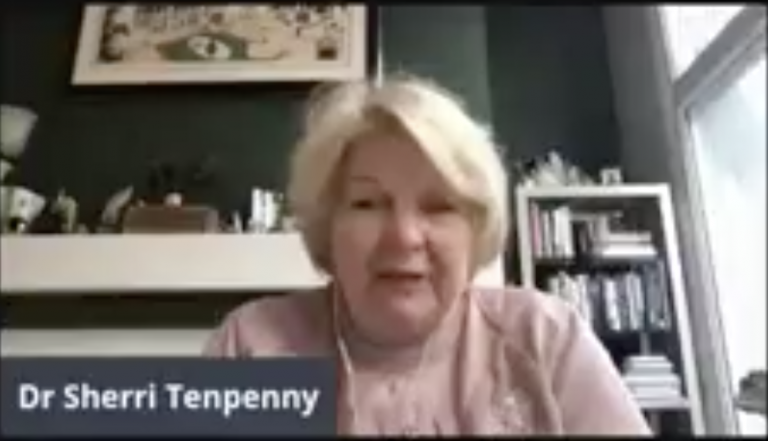 If you haven’t heard of Dr. Sherri Tenpenny, allow me to introduce you to her.

Dr. Sherri J. Tenpenny is an osteopathic medical doctor, board certified in three medical specialties. Widely regarded as the most knowledgeable and outspoken physician on the adverse impact that vaccines can have on health, Dr. Tenpenny has been a guest on hundreds of radio and national television programs (including the Dr. Oz Show and the Today Show Australia). She has lectured at Cleveland State University and Case Western Reserve Medical School, and has been a speaker at conventions, both nationally and internationally, as a recognized expert on a wide range topics within the field of Integrative Medicine including breast health, breast thermography, women’s hormones, medical uses of iodine and the adverse effects vaccines have on health.

Dr. Tenpenny is the author of several books, including best seller, ‘Saying No To Vaccines’.  She is contributing author for several other books including ‘Textbook of Food and Nutrients in Disease Management’.  Her articles for magazines have been published in over 10 languages around the world.

From 1986 to 1998, she was a full time Emergency Medicine physician and the director of the Emergency Department in Findlay, Ohio. Dr. Tenpenny’s corporate experience includes serving as the Medical Director at Sanoviv Medical Center, a 40-bed hospital located in Rosarita, Mexico in 2008 and Chief Medical Consultant for Parker Hannifin, a Fortune 250 Company with 60,000 employees in 48 countries, from 2012 to 2014.

Currently, she attends to patients three days per week at Tenpenny Integrative Medical Center, located in Cleveland, Ohio, where patients from nearly all 50 states and 17 countries have gotten well using a combination of conventional and holistic therapies.

In other words, she’s my kind of doctor!

Here is part 1 in her six-part, very in-depth article about coronavirus and the vaccines:

ABC News wrote about her bio with this negative slant:

Dr Tenpenny is widely known in the US for her outspoken views on vaccination, and regularly delivers lectures and attends seminars on the subject as well as other parts of integrative and alternative medicine.

Her website says it contains “a wealth of information that you won’t find at your pediatrician’s office”.

Saying No To Vaccines is promoted as a “comprehensive guide” which explains why vaccines are “detrimental to yours and your child’s health” and discusses “vaccine injuries” such as autism, asthma, ADHD and auto-immune disorders.

The first book rejects arguments supporting vaccination, stating that causal links between vaccines and conditions such as autism have not been disproven, and recommends ways to legally avoid vaccinations.

Dr Tenpenny believes parents should not be “forced to make decisions based on fear”.

In a 2011 article titled The Ten Reasons To Say No To Vaccines, she warned that “each shot is a Russian roulette; you never know which chamber has the bullet that could kill you”.

She has been criticized by the Stop The Australian Anti-Vaccination Network for “endangering people’s health” and “targeting vulnerable parents”.

The Australian Government says it is considering a petition written to Immigration Minister Peter Dutton to deny Dr Tenpenny a visa.

I think she is fantastic!

Doctor Explains Why You MUST Refuse The Vaccine

Of course, those intrepid researchers over at PolitiFake errrrr sorry….”PolitiFact” have already determined Dr. Tenpenny is 100% wrong:

President Joe Biden says the U.S. will have enough coronavirus vaccines for all adults by the end of May. On social media, anti-vaccine advocates falsely say that effort could lead to autoimmune diseases and death.

A Feb. 9 video features former Nevada City, Calif., Mayor Reinette Senum and Dr. Sherri Tenpenny, an osteopathic physician. Over the course of an hour, the two women characterize the coronavirus vaccine as “deadly” and a “bioweapon.” The video was published on Bitchute, a video platform similar to YouTube, but one that researchers say hosts large amounts of hate speech and disinformation.

A PolitiFact reader asked us to fact-check the video. One claim in particular stuck out:

“Some people are going to die from the vaccine directly,” Tenpenny said in the video, which has nearly 1 million views. “But a large number of people are going to start getting horribly sick and get all kinds of autoimmune diseases, 42 days to maybe a year out.”

The video was also flagged as part of Facebook’s efforts to combat false news and misinformation on its News Feed. (Read more about our partnership with Facebook.) It has been shared thousands of times on the platform — despite Facebook’s ban on anti-vaccine content.

Doctor Explains Why You MUST Refuse The Vaccine

Tenpenny is wrong. There is no evidence to suggest that the COVID-19 vaccines used in the U.S. cause autoimmune diseases or death.

Tenpenny is a licensed osteopath based in suburban Cleveland and the author of “Saying No To Vaccines: A Resource Guide for All Ages.” She runs an alternative health clinic and has previously said vaccines cause autism, a claim public health officials have debunked. Her Facebook page was removed in December for spreading misinformation, but her Instagram account still has more than 126,000 followers.

During her interview with Senum — who stepped down from the Nevada City council in July after saying she would not enforce a statewide mask mandate — Tenpenny cited an article she published Dec. 28 on Vaxxter, an anti-vaccine website.

Thank God we have these researchers over at PolitiFake so we don’t have to do our own research or think for ourselves!!!

4 thoughts on “Doctor Explains Why You MUST Refuse The Vaccine.”