Donald Trump Reacts to the Death of Talk Radio Legend Rush Limbaugh: ‘He Was a Fighter’ 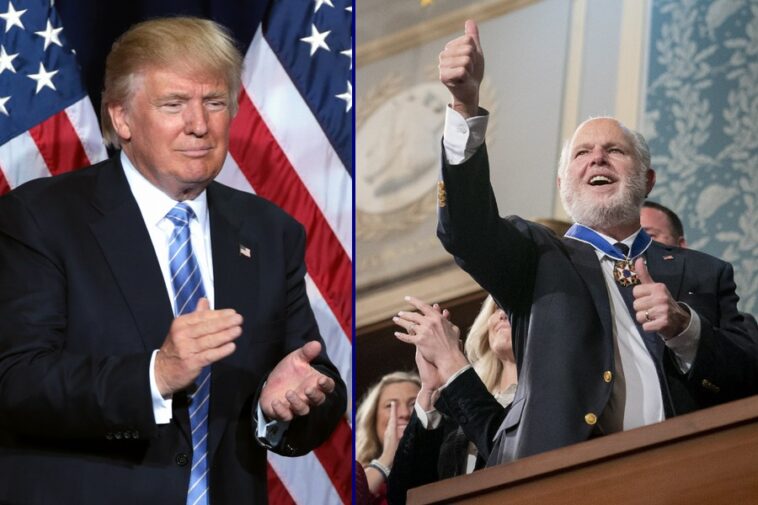 Rush Limbaugh, talk radio legend, has now taken his place above America. The conservative icon has passed away at age 70. Donald Trump himself just reacted to the news:

Donald Trump said it was a “great honor” to give the Presidential Medal of Freedom to Rush Limbaugh, adding it was “something special” on an “incredible night” during the State of the Union Address.

“Half the room went crazy and the other half of the room, they knew he should get it,” he said.

“When was the last time you spoke with Rush Limbaugh?” Bill Hemmer asked during the Fox News interview.

“Three or four days ago,” he replied. “I called him just to find out, you know, his fight was very, very courageous. He was very, very sick. And you know, from diagnosis on, it was just something that was not going to be beaten.”

“But, you wouldn’t know it and he is married to an incredible woman, Kathryn, who really, everytime I spoke to him, he would tell me how great she was, she took such great care,” he said.

“He was very brave,” Trump added. “He really could have been gone four months ago. Really. He just was fighting until the very end. He was a fighter.”

The following are some of the other touching tributes from some of Rush’s closest family, fans, associates and colleagues.One that hits hard is from his long-time producer Bo Snerdley:

God Bless you Rush.
I love you. Always and ever.

Conservative radio icons joined in to remind us of the void that was left and that we need to work even harder now to fill.

Breaking my Twitter silence to send my condolences to the Limbaugh family.
Rush changed my life, along with the lives of millions of others. The world is going to be a different place without him.

RIP Rush Limbaugh, the creator of talk radio and by extension the alternative media, an indispensable and iconic conservative voice.

He will always be the best. The original. No one else will ever come close.

Thank you, Rush. For everything. pic.twitter.com/T24qU4lor9

We cannot forget how Donald Trump awarded Rush the Presidential Medal of Freedom shortly before his untimely death.

Or how he took the time to listen to Rush:

As an aside, I will share my own modest thoughts about Rush’s passing.

Rush Limbaugh is the reason I am a conservative. His voice for American ideals like patriotism, freedom and our God-given individual rights as human beings has now left us, but he will never be forgotten. Rush has now taken hold of the Golden EIB microphone in the sky.

4 thoughts on “Donald Trump Reacts to the Death of Talk Radio Legend Rush Limbaugh: ‘He Was a Fighter’”