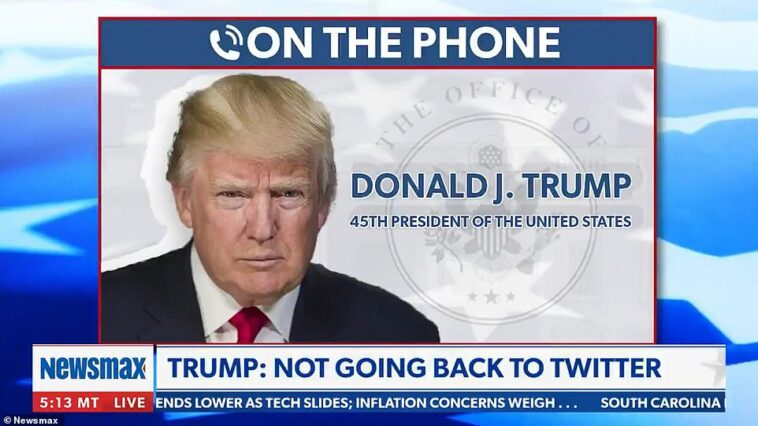 After speaking at length about Limbaugh and how much admiration he had for the conservative icon, Trump turned his attention to his ban from Twitter last month.

“They wanted me very much on Parler, you know they had a phony report that the man who was in there didn’t, I mean just the opposite, they really wanted me on Parler,” Trump said.

Trump said, “If you look at what’s going on with Twitter, I understand it’s become very boring, and millions of people are leaving, they’re leaving it because it’s not the same, and I can understand that.”

Trump taking the time to note that millions are leaving Twitter certainly seems to suggest — to some extent — that he’s itching to get back on social media.

And the fact that he mentioned Parler adds more credence to those who have been speculating that he may return on another social media platform or even create his own.

After appearing briefly on Fox News earlier on Wednesday to discuss the passing of the radio pioneer and legend, Trump released a full statement about the passing of Limbaugh via the Office of the Former President.

“The great Rush Limbaugh has passed away to a better place, free from physical pain and hostility,” wrote President Trump. “His honor, courage, strength, and loyalty will never be replaced.”

“Rush was a patriot, a defender of liberty, and someone who believed in all of the greatness our Country stands for,” President Trump added. “Rush was a friend to myself and millions of Americans – a guiding light with the ability to see the truth and paint vivid pictures over the airwaves.”

“Melania and I express our deepest condolences to his wonderful wife, Kathryn, his family, and all of his dedicated fans. He will be missed greatly.”

During his phone interview on Fox News, Trump spoke very highly of Limbaugh.

“Three or four days ago, I called him just to find out, his fight was very, very courageous, and he was very, very sick, and from diagnosis on, it was just something that was just not going to be beat, but you wouldn’t know it,” said Trump. “And he is married to an incredible woman, Kathryn, who really, every time I spoke to him, he would tell me, she took such great care. He was very brave, I mean he, in theory, could have been gone four months ago. He was fighting until the very end.”

“Rush is irreplaceable, unique, and he had an audience that was massive, and you know he could do something, he would get up in the show, and would just talk,” said Trump.

“He wouldn’t take phone calls, where everybody would call in every two minutes, and that’s sort of easy to do. He would just talk for two hours, three hours, just talk. And that’s not an easy thing to do. I once asked him, do you study for the show? And he said, actually I study very hard, which a little bit surprised me,” he added.

Trump called in to Newsmax on Wednesday for a lengthy interview that covered a wide array of topics.

He spent the first part paying tribute to the late Rush Limbaugh, who he considered a friend.

On Wednesday, former President Donald Trump gave his first interviews since leaving the White House. While the former president discussed the remarkable life of radio legend and conservative icon Rush Limbaugh, Trump also fielded other questions, like if he will be running for president in 2024.

Newsmax’s Geg Kelly tried pinning the one-term president down multiple times on the subject of a possible run.

“I’m the only guy who gets impeached and my numbers go up,” Trump joked.

Trump left the possibility of a presidential run at “you’ll see what happens.”

“It’s too early to say, but I see a lot of great polls out there. That’s for sure,” said Trump.