Every Executive Order Joe Biden Signed on His 1st Day in Office, Explained 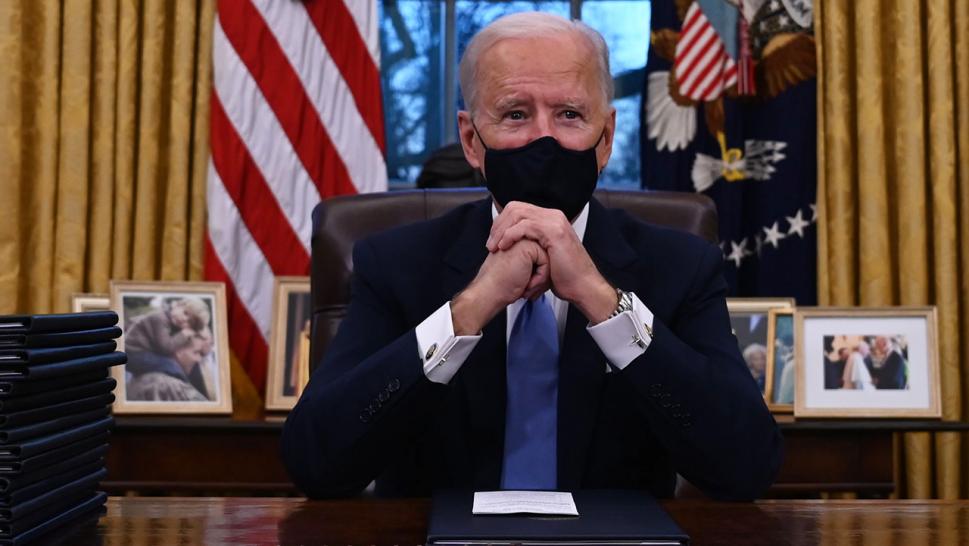 Joe Biden is off to an electric start, signing 17 executive orders – many of which will reverse decisions made during Donald Trump’s presidency – all on his first day of the job.

There is no time to waste when it comes to tackling the crises we face. That’s why today, I am heading to the Oval Office to get right to work delivering bold action and immediate relief for American families.
— President Biden (@POTUS) January 20, 2021

Perhaps equally as profoundly, by taking executive actions quickly, Biden is solidifying his presidency and symbolically moving the country away from the previous administration.

Here are the executive orders Biden signed from the Oval Office, just hours after he was sworn into presidency:

Begin a “100 Days Masking Challenge:” While Biden does not have the power to lay out a federal mask mandate, his executive order now requires masks and physical distancing on all federal properties and by all federal employees and contractors. This executive order comes with the hope that the rest of the country will follow his example.

Restructuring Response to COVID-19: Biden has appointed Jeff Zients to a new role: COVID-19 Response Coordinator. Zients, who is not a scientist but a consultant sometimes known as “Mr. Fix It,” according to the Financial Times, will report directly to Biden on matters surrounding vaccinations, testing and PPE supply. Additionally, the executive order will bring back the Directorate for Global Security and Biodefense, a position originally created under Obama but dispersed into other roles under Trump.

Moratoriums on evictions and foreclosures: “The COVID-19 pandemic has triggered an almost unaffordable housing crisis,” said White House Press Secretary Jen Psaki in a briefing to press Wednesday. In response, evictions will be halted until Feb. 28, 2021 and the foreclosure moratorium for federally guaranteed mortgages will be extended to March 31, 2021 with possibility to be extended further.

Extend pause on student loan payments and interests: Interest and principal payments for federal student loans will be extended until at least Sept. 30, 2021, a move which impacts 41 million borrowers, according to NPR. The pause on payments was originally set to expire on Jan. 31, 2021. During his campaign, Biden pledged to cancel up to $10,000 in federal student loans per borrower, but such a move will have to be decided in Congress.

Committing to fight climate change: The executive order, which Biden makes clear intends to repeal many actions set forth by Trump, intends to protect the environment by ending the Keystone XL pipeline and revoking and reviewing oil and gas development in the Arctic and around national wildlife monuments. He also intends to set new standards surrounding pollution and emissions.

Include undocumented immigrants in U.S. Census: This executive order will directly undo the exclusion of undocumented people and provide an accurate reflection of the population.

Protect the “Dreamers” program: While Trump was never able to rescind protections for Deferred Action for Childhood Arrivals (DACA) recipients, a program established under Obama that defers deportation on a case-by-case basis, Biden intends to “preserve and fortify” those protections through the Secretary of Homeland Security.

Ending the Muslim Ban: Biden calls the 2017 travel restriction a “policy rooted in religious animus and xenophobia,” and will now restart entry in the U.S. by travelers from countries including Syria, Iran, Iraq, Nigeria, Myanmar and Kyrgyzstan, among others. The executive order also instructs the state department to restart visa applications from countries once banned.

Changing Immigrations and Customs Enforcement (ICE) priorities: The Department of Homeland Security will reevaluate policies as Biden revoked arrest initiatives set forth by Trump, which he called “harsh and extreme.”

Stop Building the Wall: While Congress refused to fund the wall Trump famously promised to build along the U.S.-Mexico border, Biden is ending the national emergency declaration made by Trump. He will also redirect finances once allocated to building the wall.

Extend the stay of Liberians: A group of Liberians who have been in the United States for many years had their “deferred enforcement departure” and work authorizations extended an additional year to June 30, 2022.

Protecting against sexual orientation and gender identity discrimination: The executive order will now allow for a Supreme Court decision along with a title in the Civil Rights Act to bar against workplace discrimination.

Mandating an ethics pledge: Every executive branch appointee will now be required to sign an ethics pledge, vowing to “act in the interest of the American people and not for personal gain” and “to uphold the independence of the Department of Justice.”

Freezing Trump’s last minute regulations: The move is intended to give the new administration opportunity to review any executive orders Trump signed in his final days “to prevent any detrimental so-called ‘midnight regulations’ from taking effect, while ensuring that urgent measures in the public’s interest can proceed.”

4 thoughts on “Every Executive Order Joe Biden Signed on His 1st Day in Office, Explained”