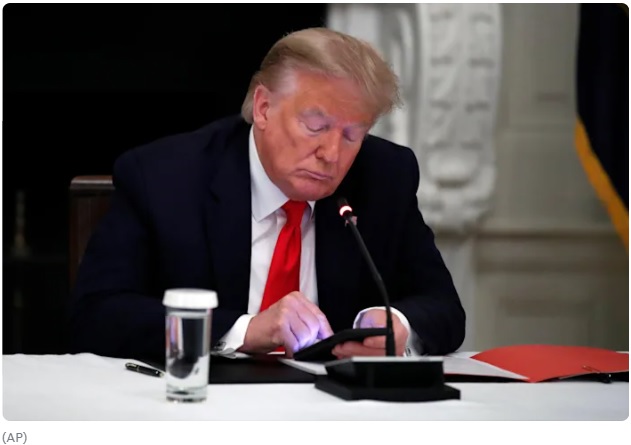 Former President Donald Trump has responded to the ruling of Facebook’s Oversight Board to uphold the ban on his account, at least for now.

“What Facebook, Twitter, and Google have done is a total disgrace and an embarrassment to our country,” he said in a statement.

Only Facebook’s Oversight Board, an independent panel that weighs in on content moderation decisions, commented on Trump’s social media presence on Wednesday.

“Free Speech has been taken away from the President of the United States because the Radical Left Lunatics are afraid of the truth, but the truth will come out anyway, bigger and stronger than ever before,” Trump said in his statement, which ended with: “These corrupt social media companies must pay a political price, and must never again be allowed to destroy and decimate our Electoral Process.”

Facebook made the decision to ban Trump from Facebook and Instagram after the former president’s inflammatory rhetoric on the platforms incited the deadly Jan. 6 attack on the U.S. Capitol. His supporters mobbed the building, seeking to overturn his 2020 election loss to President Joe Biden.

The board said in its decision Wednesday that it was “not appropriate for Facebook to impose the indeterminate and standardless penalty of indefinite suspension,” asking the site to review that part of the decision within the next six months.

Twitter also banned Trump following the riot at the Capitol.

Since being suspended from the platforms, the former president has reportedly been holed up in a converted bridal suite at his Mar-a-Lago club in Florida. He has been communicating with his fans by emailing press releases that are generally formatted like his tweets were ― short, angry and not adhering to accepted rules of capitalization.

On Tuesday, Trump launched a “communications platform” that is accessible through his website. His press releases are available there, and fans can use the tools to share them through Facebook or Twitter. However, there is no way for them to communicate back to him.

“President Trump’s website is a great resource to find his latest statements and highlights from his first term in office, but this is not a new social media platform. We’ll have additional information coming on that front in the very near future,” Miller tweeted.

This article originally appeared on HuffPost and has been updated.