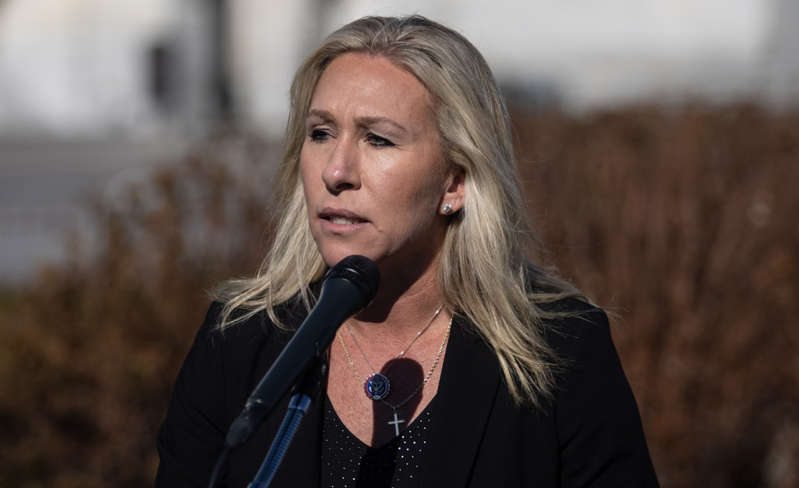 The Georgia Republican told the Washington Examiner those on the Right will be eager to join the former president’s new platform once it goes live because they remain loyal to his cause.

“President Trump, once he launches his media company, this new platform will be a major threat for Facebook and Twitter and any other social media platform in the future because we know that conservatives and Republicans are going to flock there because they’ll want to be where [he is] on social media,” she told the Washington Examiner over the phone, adding that the existing social media companies will “have to compete in the marketplace” if they have “any business sense at all.”

Greene, a businesswoman who operated a series of gyms in Georgia before her successful 2020 congressional bid, speculated that this concern about Trump’s platform motivated an independent Oversight Board’s decision on Wednesday to maintain the former president’s suspension from Facebook.

“I think that’s why we saw them delay their decision and say, ‘We’re going to decide in another six months’ because they’re waiting to see what’s going to happen with President Trump’s new social media site and how it will impact their platforms also,” she said.

Trump may yet be able to return to Facebook because the Oversight Board said it was “not appropriate” for the platform to impose a permanent ban on his account. The social media giant now has six months to review Trump’s suspension once again to justify “a proportionate response that is consistent with the rules that are applied to other users of its platform,” the Oversight Board said in its decision Wednesday.

Speculation has stirred for months that Trump would create his own social media platform.

On Tuesday, he created his own communications platform, “From the Desk of Donald J. Trump,” as a means of “allow[ing] Trump to communicate with his followers.” But the site does not allow much for user engagement other than to share Trump’s posts on Twitter and Facebook, as well as a “heart” button.

“President Trump’s website is a great resource to find his latest statements and highlights from his first term in office, but this is not a new social media platform,” Trump senior adviser Jason Miller told Fox News. “We’ll have additional information coming on that front in the very near future.”

Greene, who has been locked out of her Twitter account twice, offered an alternative to the idea that the Facebook Oversight Board’s decision was financially driven, saying Big Tech is closely aligned with those on the Left.

“The board wants to continue to please who they really align with, the Democrats, in continuing to keep President Trump off of Facebook because Democrats think that he’s horrible and can’t stand him, and they don’t want him on there. And then that’s a problem because conservatives and Republicans love President Trump and would love for his Facebook page to be reinstated,” she said.

Other Republicans criticized the decision to uphold the ban, with House Minority Leader Kevin McCarthy accusing Facebook of being “more interested in acting like a Democrat Super PAC than a platform for free speech and open debate.”

The former president blasted “Radical Left Lunatics” in response to the ban being maintained.

“Free Speech has been taken away from the President of the United States because the Radical Left Lunatics are afraid of the truth, but the truth will come out anyway, bigger and stronger than ever before,” he said in a statement Wednesday, saying what Facebook, along with Twitter and Google, has done is “a total disgrace and an embarrassment to our Country.”

Trump was first banned from Facebook in the wake of the Jan. 6 U.S. Capitol riot for what the company said was the use of language that incited violence. At the time, Facebook CEO Mark Zuckerberg said his company believed “the risks of allowing the President to continue to use our service during this period are simply too great.” Other platforms, such as Twitter and YouTube, similarly banned the then-president.