“I didn’t get voted into office by politicians, I serve The People” Rep Marjorie Taylor Greene 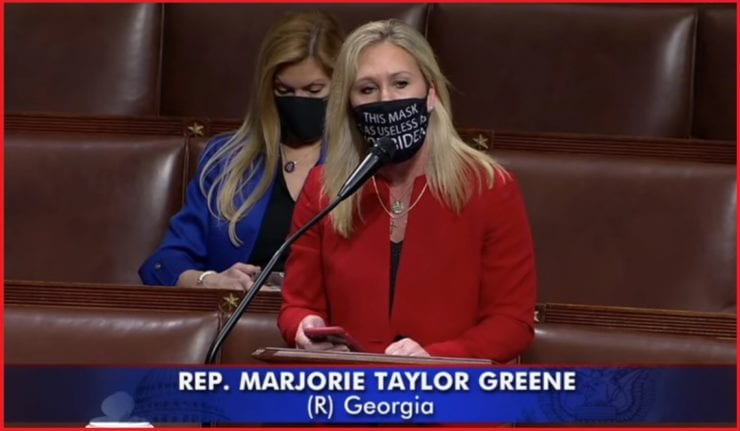 Rep. Marjorie Taylor Greene of Georgia is causing the Swamp to take notice of her direct attacks on the radical left in congress. In turn, she has taken many attacks from the radical left for her refusal to back down. She is also under attack from her “GOP colleagues” and held nothing back in her statement to them today:

I dedicate this thread to my GOP Colleagues:

The headline of this article should read, “Marjorie Cares About The People Not The Politicians And Refuses To Join The Swamp.”

I didn’t get voted into office by politicians; I serve The People.

It’s unfortunate that some of my GOP colleagues, who have been in Congress a lot longer than me, don’t share the outrage that Republican voters feel about the Democrat’s radical agenda!

As if a $1.9 trillion dollar woke progressive spending spree with only 9% to covid isn’t enough.

Dems destroying women’s rights and sports, wiping out religious freedoms, defunding the police, HR1, and erasing gender completely, doesn’t seem to be enough to make some of my GOP colleagues feel like they can actually stand up out of a chair and walk to go vote for a motion to adjourn.

They’d rather sit on committee zoom meetings where they are mute and their hands are tied doing nothing.

I call for motions to adjourn so that the Democrats can have at least another hour to come to their senses before they vote for this kind of crap.

Oddly, some of my GOP colleagues don’t share my outrage and are annoyed with me, for trying to do anything I possibly can to disrupt and stop the Democrats from destroying our country.

They’re annoyed because it was a little inconvenient and I didn’t tell them ahead of time, so they could just complain to me and try to convince me not to do it.

Sure I understand that the swamp operates a certain way and everyone is frustrated with me that I just don’t dive right off the high dive and plunge right into the murky disgusting slime and just do as I’m told.

But I should remind everyone I wasn’t recruited by “those in charge” to run for Congress. I ran because I’m very much one of those Neanderthal Deplorable Invisible Taxpaying Regular People.

You know the type of person that is supposed to just donate, vote, keep your mouth shut, and “support” the elected Republicans that know way more than us little folks that run businesses, employ people and pay taxes.

You know what made me run for Congress?

In 2016-2018, when the GOP controlled House and Senate couldn’t manage to repeal Obamacare, fund our border wall, did NOT end abortion (even though they all say they are pro-life), and did nothing to stop the ridiculous mind numbing Russian collusion conspiracy theory witch hunt on President Trump.

I along with MOST Republican voters lost full confidence in MANY of the Republicans we elect.

How dare I say this out loud right?

In spite of having President Trump who wanted to sign into law so many good things that R voters desperately wanted, our Republican Congress failed and that’s why they lost the House in 2018.

But so many of these Republicans still don’t seem to get it.

The House took back seats in 2020 and nearly won the majority BECAUSE OF PRESIDENT TRUMP AND AMERICA FIRST POLICIES!

Why do you think Republican voters love Trump?

Because HE FOUGHT FOR THE PEOPLE!

He didn’t join the swamp to do business as usual that doesn’t work!

So for some of my GOP colleagues who think sitting on your ass on zoom committee meeting where you are powerless and Democrats could care less about your ideas, is actually important. AND that calendars and schedules matter so much, when Pelosi changes it every week.

AND zoom calls with your Chambers of Commerces and constituents where you are spouting off about how you are “doing everything you can” to stop the radical insane policies of the Dems, yet you are whining about walking to go vote for a motion to adjourn.

Here is a little reminder for you.

So you better think hard about how your whining sounds to your voters, who really don’t care about how far you have to walk to vote.

Instead, let’s change the playbook so we can win!

Rep. Marjorie Taylor Greene: “I Had A Great Call With President Trump”

3 thoughts on ““I didn’t get voted into office by politicians, I serve The People” Rep Marjorie Taylor Greene”