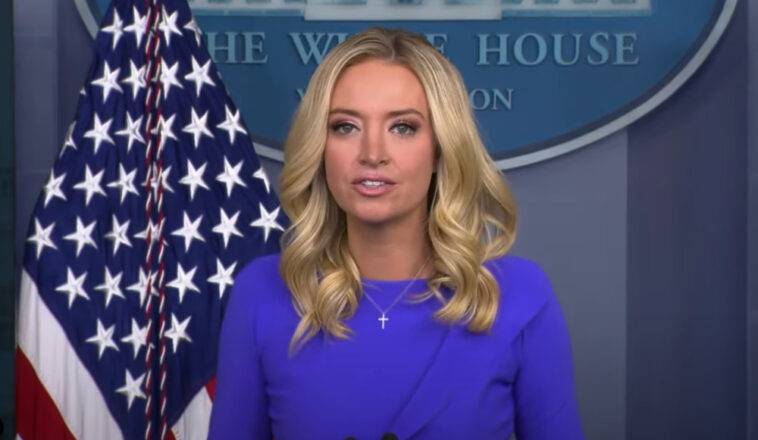 Kayleigh McEnany thinks it’s Biden’s staffers that are keeping him away from the press. By this point in their respective presidencies, Donald Trump, Barack Obama, and George W. Bush had all given press conferences, yet Joe Biden has yet to talk to the press once.

During an interview on Fox News, former White House Press Secretary Kayleigh McEnany said she had warned reporters that Biden would not be accessible.

“I actually warned some of the reporters there in the press corps,” McEnany said. “In the waning days of the Trump administration, he didn’t do as much press availabilities every day as he walked to [Marine One] or those press conferences.”

“I said to the correspondents, ‘You’re getting a little taste of what it will be like in the Biden administration,’” she added. “I said I wouldn’t expect to see much of him. We haven’t. We’re still waiting on that solo press conference, we’re still waiting for the day, apparently by the end of the month.”

This came days after McEnany told Fox Business that Biden’s lack of press conferences was “extraordinary” but “not unprecedented.”

“You’ll recall… the ‘basement strategy’ is what he employed on the campaign trail,” she said, referring to then-candidate Biden doing press from his basement. “He went something like 50 days and he only took questions twice. And when he did, they were hand-picked questions.”

“I think his staff does not have faith that he can stand at the podium and have a press conference the way President Trump did many times,” she said. “I don’t think this is President Biden saying, ‘I don’t want to do this. I think it’s those around him recognizing when he does speak, it doesn’t always turn out so well, like calling Republicans ‘Neanderthals,’ as he did recently in the Oval Office.”

In the end, McEnany believes that Biden’s staffers are trying to protect him by delaying when he speaks to the press.

“The pressure is mounting when you have even left-wing outlets calling him out for this,” she said.

Kayleigh McEnany comments come as Biden is even facing pressure from lefty media reporters and outlets to hold a solo press conference.

In an op-ed on Sunday, The Washington Post’s editorial board urged Biden to hold a press conference:

“Last month would have been better, and this week would be better than next. Avoiding news conferences must not become a regular habit for Mr. Biden. He is the president, and Americans have every right to expect that he will regularly submit himself to substantial questioning.”

McEnany: She ‘Warned Reporters’ About Biden

It added that Biden could use a press conference to “advertise his more thoughtful, reality-based approach.”

It’s not hard for many to see what is going on.

Biden is the first president to not hold a solo press conference — where he is forced to take questions on his own from reporters — in his first 30 days in office.

Biden won’t do it and his handlers aren’t telling the media why they are keeping the president hidden.

2 thoughts on “Kayleigh McEnany: She ‘Warned Reporters’ About Biden”