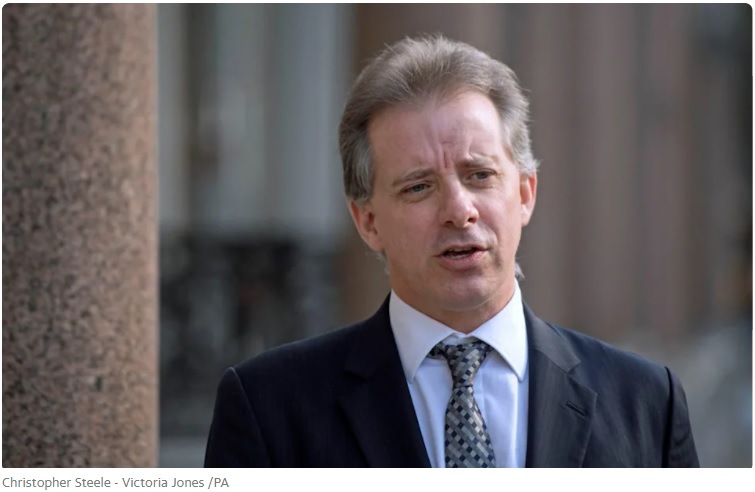 The former MI6 spy Christopher Steele produced a second dossier for the FBI on Donald Trump while he was in the White House, sources told The Telegraph.

Mr Steele filed a series of intelligence reports to US authorities during the Trump presidency, including information concerning alleged sexual exploits.

Mr Steele’s continued involvement supplying intelligence to the FBI appears to give credibility to his original dossier, which sparked a Special Counsel investigation by prosecutor Robert Mueller into Russian interference into the 2016 US presidential elections.

It also contained the sensational claim that the Kremlin was in possession of compromising material, including a sex tape of Mr Trump with a prostitute at a hotel in Moscow in 2013.

The former president has strongly denied the claims made in the Steele dossier, denouncing it as fake news.

The emergence of the 35-page dossier, written between June and December 2016, did not it appears signal an end to the former MI6 officer’s working relationship with the FBI and continued after Mr Trump’s inauguration in January 2017.

The Telegraph understands that Mr Steele, through his company Orbis Business Intelligence, continued supplying raw intelligence to the federal authorities in the US.

The second dossier contains raw intelligence that makes further claims of Russian meddling in the US election and also references claims regarding the existence of further sex tapes. The second dossier is reliant on separate sources to those who supplied information for the first reports.

The fact the FBI continued to receive intelligence from Mr Steele, who ran MI6’s Russia desk from 2006 to 2009 before setting up Orbis, is potentially significant because it shows his work was apparently still being taken seriously after Mr Trump took hold of the reins of power.

The Mueller inquiry led to a series of convictions including the jailing of Paul Manafort, Trump’s campaign chairman. Others convicted included George Papadopoulos, an adviser to the Trump campaign; and Roger Stone, a long time ally and former adviser.

Intelligence gathered by Mr Steele for his second dossier is understood to include further details of Mr Manafort’s alleged Russian contacts.

Earlier this month, news sources in the US reported that Konstantin Kilimnik, an associate of Mr Manafort, had passed Trump campaign polling and strategy information to Russian intelligence sources.

The FBI is offering a $250,000 reward for “information leading to the arrest of” Konstantin Kilimnik, an associate of Mr Manafort.

The US Treasury has placed Mr Kilimnik under sanctions, describing him as a “known Russian Intelligence Services agent”.

The Treasury report states: “During the 2016 US presidential election campaign, Kilimnik provided the Russian Intelligence Services with sensitive information on polling and campaign strategy.”

It is understood that Mr Steele believes the targeting of Mr Kilimnik shows collusion between the Trump presidential campaign and Russian intelligence services.

The FBI interviewed Mr Steele at the Grosvenor Hotel in central London, close to his offices, in September 2017 as part of then ongoing inquiries into Russian meddling.

In the interview, Mr Steele told the FBI that Orbis had “four discrete, ‘hermetically-sealed’ main agent networks”. His primary “sub-source” for the dossier was no longer “active” at the time of the interview with FBI agents, but that another “main agent network is up and running and is now starting to get good information”.

The Telegraph understands this agent, referred to by Mr Steele in his interview with the FBI, supplied information for the second dossier.

The new dossier contains, like the first, a series of raw intelligence reports on alleged Russian interference linked to Mr Trump and his associates.

The suggestion it includes further details of Mr Trump’s sexual exploits will infuriate the former president. On Twitter he has called the allegations a “pile of garbage”.

The original dossier had been dismissed, according to the New York Times, by sources inside the CIA as “internet rumour”, but it was used by the US Justice Department to support a secret court order authorising surveillance of Carter Page, a former Trump campaign aide. Page is now suing the FBI and Justice Department for $75million.