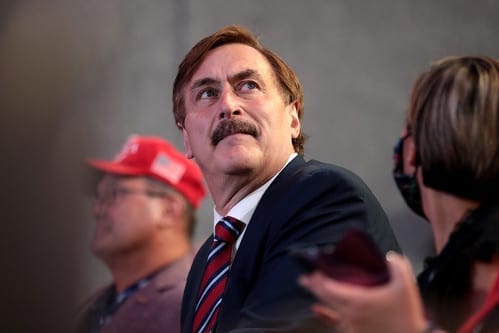 Mike Lindell is continuing his fight for the truth.

But during an interview with radio host Eric Metaxas, Lindell said he had a team working to uncover evidence—and believed it had now found material that was strong enough to sway Supreme Court judges.

“Over the course of the next four to five weeks, I’m going to dump all this evidence for all to see every day on my new platform Frank, where the world can’t suppress it,”he said.

Lindell says Frank, his proposed social media platform, will combine ideas from YouTube and Twitter, and will be able to handle half a billion users. People kicked off YouTube will be given a “bonus” if they join the service, he says.

The Mainstream Media likes to mock Lindell but that is because they are scared of what he might have.

Lindell has challenged Dominion even after they sued him.

Lindell has talked to a ton of whistleblowers and data analysts.

We will see what new evidence he is going to drop.

Lindell, who claimed in a separate interview on Friday that Trump would be back in office by August, said a media blitz about his election claims would begin on Wednesday with the release of a documentary on LindellTV.com. The film includes an interview with a cyber-expert he named only as “Dr Frank.”

“It’s a beautiful thing, we can see what the machines did,” he added, suggesting that the documentary would include further claims about voting machines.