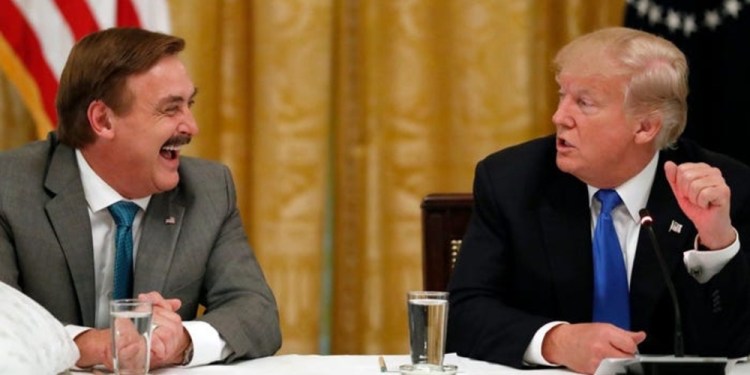 On the surface, he doesn’t seem like the kind of guy I would support. But I do. Wholeheartedly.

MyPillow CEO Mike Lindell is a firebrand. His passion is a benefit to our nation in the eyes of his supporters and a detriment to those who hate him. As his three-day Cyber Symposium starts today, the hate coming from mainstream media as well as an unfortunate number of “conservative” news outlets is already flowing freely. They’re busy rolling their eyes and chuckling through their articles as they do their best to dismiss the bombshells promised regarding the stolen 2020 presidential election.

For complete transparency, MyPillow is our primary sponsor. Anytime people buy from them with promo code, “NOQ,” they save money and we get a commission. But here’s the thing, and I have the receipts to prove it. We supported Lindell and MyPillow long before we ever made them a sponsor and I would be supporting them today if they weren’t a sponsor. The commissions are good. The truth is much better.

His Cyber Symposium had a rocky start as hackers took down the livestream for around an hour. This is not shocking because his sites have a history of both being attacked and not being prepared to handle them properly. I’m no tech guy, but I would have hoped they’d be ready for whatever came their way.

It was a hiccup. They’ve overcome it and will hopefully be able to stave off other attacks for the duration of the event. The Cyber Symposium is on right now with speakers explaining the events before, during, and after the 2020 election. We’ll be covering the bombshells as quickly as they’re dropped.

As the saying goes, if you’re taking flak you’re over the target. Lindell has been taking some of the most intense flak imaginable in the months that he’s dedicated to exposing the stolen nature of the election. It’s not just the hacking. It’s the lawsuits from groups like Dominion Voting Systems, which filed fresh lawsuits today. It’s the massive number of cancellations by retail stores that no longer carry his products. It’s hateful media from both sides of the political aisle that are desperate to keep people from taking him seriously.

Mike Lindell takes more abuse from media and corporate America than anyone other than Donald Trump. It’s been a hard, expensive road for both him and his company, but he pushes forward. And therein lies one of the most important reasons I support his efforts even if I don’t agree with some of the ways he presents his ideas. There’s a kinship amongst those of us who speak the truth despite the consequences. We have been canceled, banned, harassed, blacklisted, and have had attempts made to destroy us as an outlet. My experience may be a very tiny microcosm of what Lindell is going through, but I can understand what it feels like to wake up every morning wondering what new attacks would be landing today.

This Cyber Symposium is intended to deliver enough evidence to force a reversal of the 2020 election results, correcting them in a way that will bring back the rightful President of the United States. I don’t know if it will work, and like many I have my doubts. It’s not that I doubt the evidence. From what I’ve seen, it’s rock solid. My doubts surface when I see the mountains of evidence we already saw in the wake of the election, evidence that was suppressed, ignored, falsely fact-checked, and denied by most, including the judiciary.

But I’m still going to watch. I’m still going to share what they reveal. We must keep fighting because accepting the results of the stolen election as irreversible is to accept that our nation and the Constitution upon which it was stabilized are both lost. As difficult as it seems to be able to correct the election, it’s even more difficult to imagine making it as a nation if the stolen election is allowed to stand without recourse or repercussions.

I don’t have to agree with everything Lindell says or the ways in which he presents his information. I’ll continue to support him and his company because he’s a patriot. He loves this nation. He is putting himself at great financial, social, and even physical risk every day to get the truth out there. Those who dismiss him are either complicit, such as mainstream media, or utter cowards, such as the “conservatives” who believe the election was stolen but now want us all to just move on and try again next time. If these “conservatives” were around in 1776, they would have been trying to convince everyone that England wasn’t so bad and we should just push for reforms instead of independence.

Leftists will laugh and far too many on the right will cringe at those of us who support “crazy” Mike Lindell and this Cyber Symposium. But I’d rather take a shot, even a slim one, at saving the nation than sit back and accept our demise.

3 thoughts on “Why Support Mike Lindell and His Cyber Symposium Despite the Hiccups?”