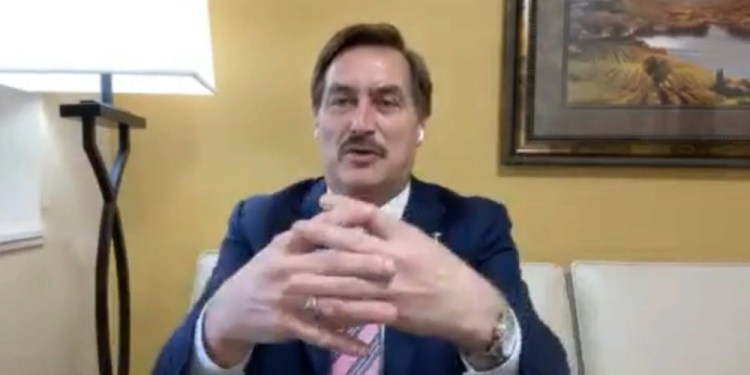 In what may have been the most explosive interview we’ve done to date, MyPillow CEO Mike Lindell drops bombshell after bombshell, including an exclusive explanation of evidence his team has found regarding the 2020 election. There is a direct correlation between the vote ‘drops’ that occurred in the morning hours after election day and Chinese cyberattacks. And he’s bringing receipts.

As a nation, we are faced with multiple major threats. Voter fraud, Covid-19 vaccines, mainstream media censorship, and Big Tech tyranny are just a few of the things challenging the nation and the Constitution. They all happen to be associated with someone I had the pleasure of speaking with for nearly an hour.

MyPillow founder and CEO Mike Lindell has lived an amazing life. His story is one that has been told many times, so with our limited time on the latest episode of NOQ Report we bypassed the intro and went straight into the meat of the subject. For a great introduction and history of Lindell, check out this show from Glasov Gang.

He’s been in the news lately for multiple reasons. One of the biggest is his upcoming social site, Frank Speech, which officially launches next week. He described it as a combination of YouTube and Twitter with a focus on free speech.

“They’ve attacked our First Amendment rights like nothing we’ve seen in our history,” he said. Users can go to the website today and sign up early.

There were far too many bombshells dropped in this episode of NOQ Report to detail in a single article. He discussed his theory about David Hogg, the short-lived “competitor” in the pillow industry who Lindell believes never really intended to sell pillows. We discussed vaccines, his upcoming plans, and even more about Frank Speech. But there was one announcement he made on the show that must be discussed.

“I’ll announce it on your show right now,” he said. “It’s coming on Absolute Interference next week. We’re launching to the world April 20th, but in that show, we’re going to show something.”

That “something” turned out to be arguably the most important bombshell he’s dropped regarding 2020 election fraud. The forensic evidence of technological voter fraud has been widely discussed but never fully sourced, nor has it been attributed directly to irregularities in vote counts. Now, the truth is finally starting to come out.

He talked about the teams he put together for Absolute Interference and how he wanted to dig deeper into certain topics. “I said, ‘You know what? I want you to take some [cyberattacks] specifically where it came out of China… take like 20 of them… I want those attacks that came direct out of China, I want a team on the ground, a separate cyber-team.’”

What were they looking for?

“They checked out physically where the attacks came from, the longitude-latitude, the IP addresses of the machines, the IDs of the computers, who did it?” he said.

His team cross-referenced the timestamps of the cyberattacks with the “flips” of votes that he and others have documented before. They were a perfect match. He had the results audited by a third-party who confirmed the findings.

Folks, this is huge. It tells us what many have speculated about over the last five months. There was a literal hack (not to be confused with the fake news “Russia Russia Russia” hacks of 2016) on our elections in which vote totals were changed to reflect a Biden victory.

His team was able to duplicate this same process in a total of five states—Wisconsin, Arizona, Pennsylvania, Georgia, and Michigan. Those electoral college votes tally to more than enough for China and the Democrats to flip the election from a Trump victory to a stolen win for Joe Biden.

With various audits in the works and others being pushed by many groups across the country, the data that Lindell and his team are revealing to the world will be crucial. It’s one thing to find evidence of tampering. It’s another thing altogether to compile the data in a way that demonstrates not only undeniable voter fraud but vote-switching sufficient enough to have an impact on the election results. Nobody, not the Supreme Court nor anyone in DC, would be willing to lift a finger regardless what the audits say unless the fraud can be shown to have changed the outcome. With what Lindell’s team has found, we may have the proof.

Timestamp data with sources and attribution gives us a smoking gun. The judiciary has been able to sidestep every previous attempt, but if the people are made aware of the data found in audits combined with the connections Lindell’s teams have made on the cyberattack front, even a feckless Supreme Court will be unable to ignore it. This is why Frank Speech will play a crucial role in disseminating the information.

We will cover other items discussed in this jam-packed show at a future date, but it behooves everyone to watch or listen to the episode now. It will take a day or two to unpack all that Lindell revealed and combine it with other information that’s already coming out, but the raw explanations are ready to see or hear.

Bringing the truth about the 2020 election to the forefront has been a major challenge for many patriots. But it’s coming out nevertheless and with Frank Speech, the censors will not able hide these bombshells.