“MISS ME YET?” Donald Trump Goes On Hilarious Rant During Wedding Reception At Mara-Lago 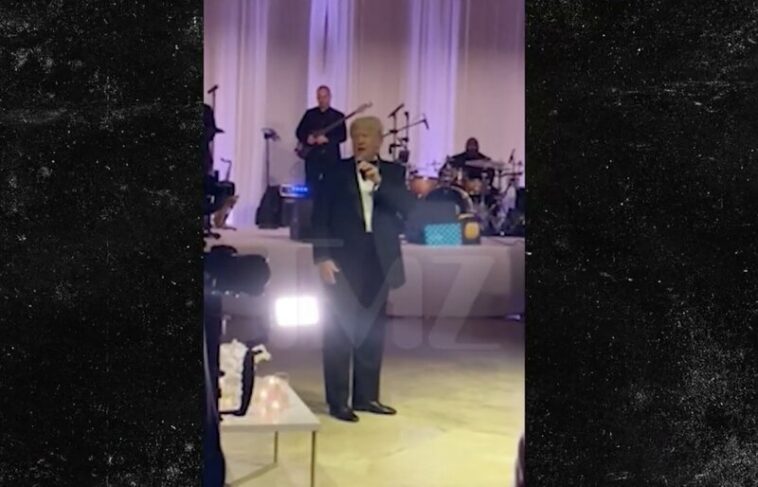 On Saturday evening, former President Donald Trump went on a classic “Trump style” rant durnig a wedding reception at Mara-Lago. The speech quickly turned into hilarious political ramblings about Iran, Biden, the border and the 2020 election, among other things. The video footage was obtained by TMZ over the weekend.

“They’re telling me about Iran – how are we doing with Iran? How do you think that’s going? Ahh they were ready to make a deal, they would’ve done anything and this guy goes and drops the sanctions and says ‘We’d like to negotiate now’ and they say ‘No we don’t want to deal with the United States’, no, they don’t want to deal with us”, Trump said, hilariously rambling.

“The border is not good. The border is the worst anybody has ever seen it. And what you see now, multiply it times 10,” Trump continued.

“Look, it’s a disaster. It’s a humanitarian disaster from their standpoint and it’s gonna destroy the country and, frankly, the country can’t afford it,” he said.

Trump continued railing on other horrible aspects about Biden’s presidency before asking the crowd, “Do you miss me yet?”

It’s good to see President Trump still having fun out there.

Make no mistake, his political aspirations are still sky high and he doesn’t seem to be going anywhere anytime soon.

One thought on ““MISS ME YET?” Donald Trump Goes On Hilarious Rant During Wedding Reception At Mara-Lago”