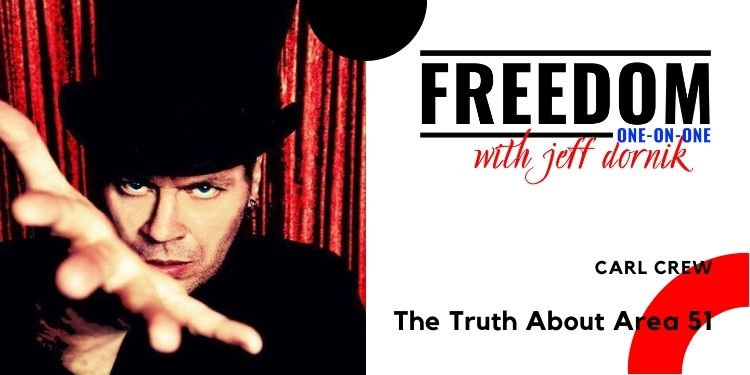 Area 51 is a top-secret military location in the deserts of Nevada. There’ve have been many wild conspiracy theories about what’s really going on there, ranging from secretive weapons testing to UFOs. Carl Crew, host of the Fourth Watch Files, joins this episode of Freedom One-On-One to break down what’s really going on at Area 51… it’s not about UFOs, but occultic demonic activity.

Area 51 is one of those extremely entertaining topics for conspiracy theory enthusiasts. Due to the extreme secrecy regarding this top secret military base, the theories about what’s going on there range from a secret military weapons testing site to the wildly popular UFO and aliens research center. While the truth is probably somewhere in the middle, during this episode of Freedom One-On-One, Carl Crew explains why he believes that Area 51 has deep ties to the occult and demonic activity.

For the vast majority of Americans, UFOs are seen as either space crafts by aliens from another planet or nothing more than military technology that the public is not aware of yet. One theory that most have not even considered is that aliens might actually be demons. This theory would actually fit in both with Biblical accounts of demonic activity, as well as prophecy for the End Times.

Carl explained the occultic history of Area 51, including deep ties to L Ron Hubbad (founder of Scientology), Aleister Crowley and other Satanic individuals. According to reports, a Satanic ritual was performed, opening up a portal to other dimensions, which brought about access to knowledge from demons which was then applied to the weapons and military craft created and tested at this top secret location.

A lot of this knowledge of the occult was brought over after World War II with Project Paperclip, which allowed Nazis to come to America and share with us their knowledge and expertise in exchange for freedom. It is widely documented that Adolf Hitler and Nazi Germany were using access to demonic knowledge in their attempt to conquer the world. It could even be argued that Satan was attempting to use Hitler to establish his one-world government prophesied about in the Book of Revelation. There have been documented examples of flying saucers and other “UFO” space crafts used by the Nazis during World War II. It’s no surprise that they’d bring this same technology with them during Operation Paperclip.

This all plays into the reality that the battle that we are waging within America is a spiritual one, between good and evil. While America was founded by Christian men who wanted One Nation Under God, it has since been hijacked by dark forces… or, in other words, the Deep State. They are using demonic forces in an attempt to establish their Satanic one world government. Many thought that Nazi Germany was conquered during the 1940s. Unfortunately, they’ve continued their mission of world domination by joining forces with the American government.

It is important to remember that this is a spiritual war that we are waging. Yes, this is physical political battle, as well. But the primary focus is on a spiritual level. As Christians and Conservatives, we cannot lose sight of our priorities and what is really going on. If we want to save America, we are going to have to turn back to Christ and follow his ways. That includes ridding our government of its ties to the occult… which may be exactly what is going on at Area 51.