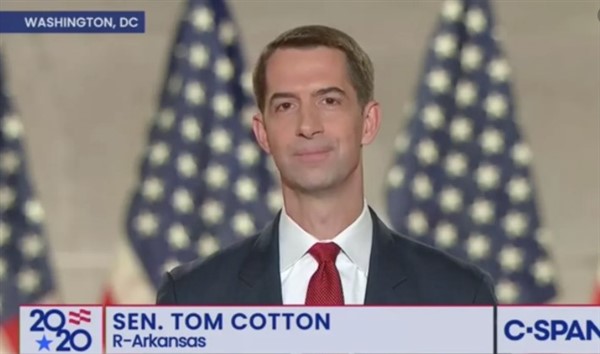 Now that the tyranny of the majority has prevailed and an unprecedented second sham impeachment of President Trump has taken place, the grandstanding of Nancy Pelosi and her Democrat mob heads to the Senate.

Democrats were joined by a handful of backstabbing Republicans including former veep Dick Cheney’s ambitious daughter in putting a permanent stain on the institution of Congress with their vote to impeach one week before the end of Trump’s historic term.

But Pelosi’s political games face an uncertain future with Senate Minority Leader Mitch McConnell refusing to bow to demands to rush a trial but there could be an even bigger problem for Dems – such a trial may be unconstitutional.

That is the assertion of Republican Senator Tom Cotton of Arkansas who in a statement released Wednesday, states that the upper chamber lacks the constitutional authority to convene what would be a kangaroo court against a president who is no longer in office.

My statement on senate impeachment proceedings:https://t.co/F8q0VaQyWR

According to Sen. Cotton:

“’There is no grievance that is a fit object of redress by mob law.’ Those words are as true today as when Abraham Lincoln spoke them. As I said last summer when mob violence gripped our streets, so I say again about the mob violence at our nation’s Capitol last week: those persons responsible should be held accountable in the courts to the full extent of the law.

The House has passed an article of impeachment against the president, but the Senate under its rules and precedents cannot start and conclude a fair trial before the president leaves office next week. Under these circumstances, the Senate lacks constitutional authority to conduct impeachment proceedings against a former president. The Founders designed the impeachment process as a way to remove officeholders from public office—not an inquest against private citizens. The Constitution presupposes an office from which an impeached officeholder can be removed.

Congress and the executive branch should concentrate entirely for the next week on conducting a safe and orderly transfer of power. After January 20, Congress should get on with the people’s business: improving our vaccination efforts, getting kids back to school, and getting workers back on the job.”

The spectacle of a rushed nationally televised Senate trial to lynch Trump will not only further inflame the tensions in a nation that has already been pushed to the edge but could inflict lasting damage on the GOP with a large portion of the 74 + million who voted for his reelection.

It is very possible that enough anti-Trump Republicans including Mitt Romney, Ben Sasse, Pat Toomey, Susan Collins, Lisa Murkowski, and others will join Democrats to convict but it will be a purely political move by an alliance with the objective of preventing Trump from running in 2024.

Perhaps Cotton can save the country from a travesty that will only cement one-party rule for Democrats but that is assuming that the Constitution still matters to a vengeful mob out for revenge.