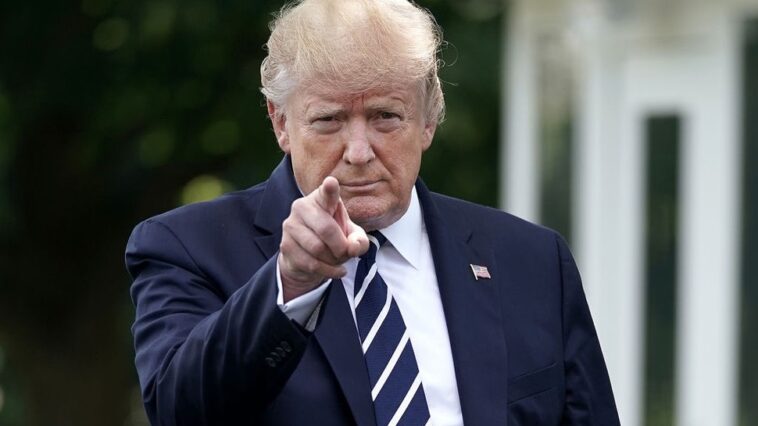 Just one day before another sham impeachment trial, President Trump’s legal team has methodically laid out their case in a blistering new memorandum.

The memorandum makes the case for Trump’s innocence in detailed and methodical fashion. At one point in the letter, Trump’s lawyers say that the Democrats are leaving out a “chilling fact” about that fateful day.

On page 7 of the memorandum, the Trump legal team confirms that law enforcement received reports of a potential attack on the Capitol well before Trump’s January 6th speech…throwing out the possibility of a sudden “incitement” by the 45th President’s speech.

“Despite going to great lengths to include irrelevant information regarding Mr. Trump’s comments dating back to August 2020 and various postings on social media, the House Managers are silent on one very chilling fact. The Federal Bureau of Investigation has confirmed that the breach at the Capitol was planned several days in advance of the rally, and therefore had nothing to do with the President’s speech on January 6th at the Ellipse,” they said.

“According to investigative reports all released after January 6, 2021, “the Capitol Police, the NYPD and the FBI all had prior warning there was going to be an attack on the Capitol…”Embarrassingly enough, even members of the Democratic leadership themselves have admitted on the record, albeit subsequent to January 6, 2021, that they believed the riots were pre-planned, with some, including Representative James C. Clyburn, the House Democratic Whip, going so far as to accuse fellow House Members of coordinating and planning the attack in advance as co-conspirators,” the Trump team added.

“Either the President incited the riots, like the Article claims, or the riots were pre-planned by a small group of criminals who deserve punishment to the fullest extent of the law,” they continued.

“The real truth is that the people who criminally breached the Capitol did so of their own to allow a “good crisis” to go to waste, the Democratic leadership is incapable of understanding that not everything can always be blamed on their political adversaries, no matter how very badly they may wish to exploit any moment of uncertainty on the part of the American people. A simple timeline of events demonstrates conclusively that the riots were not inspired by the President’s speech at the Ellipse. “The Capitol is 1.6 miles away from Ellipse Park which is near the White House. This is approximately a 30-33 minute walk. Trump began addressing the crowd at 11:58 AM and made his final remarks at 1:12 PM… Protesters, activists and rioters had already breached Capitol Grounds a mile away 19 minutes prior to the end of President Trump’s speech,” they concluded.

In another section of the letter, Trump’s legal team digs into the text of the former President’s speech that morning.

“At the demand of the Speaker of the House, certain members of the House drafted and introduced Resolution 24 impeaching Mr. Trump, in his capacity as President of the United States. The single Article titled “Incitement of Insurrection” charged Mr. Trump with engaging in “high Crimes and Misdemeanors by inciting violence against the Government of the United States,” the letter states.

“An insurrection – unlike a riot – is an organized movement acting for the express purpose to overthrow and take possession of a government’s powers. Incitement is the act of encouraging someone to do or feel something unpleasant or violent. President Trump’s speech was not an act encouraging an organized movement to overthrow the Unites States government,” the lawyers continue.

“On January 6, 2021, Mr. Trump addressed a crowd of people who had gathered on the Ellipse, public land that is part of the President’s Park next to the White House. Mr. Trump spoke for approximately one hour and fifteen minutes. Of the over 10,000 words spoken, Mr. Trump used the word “fight” a little more than a handful of times and each time in the figurative sense that has long been accepted in public discourse when urging people to stand and use their voices to be heard on matters important to them; it was not and could not be construed to encourage acts of violence,” they added.

“Mr. Trump never made any express or implied mention of weapons, the need for weapons, or anything of the sort. Instead, he simply called on those gathered to peacefully and patriotically use their voices,” the lawyers added.

This is a short summary of two key points of the pre-trial memorandum by Trump’s team. Check back for more as we unpack this lengthy letter.

Click here to read the entire memorandum for yourself….

President Trump Has Been Officially Acquitted In 2nd Impeachment Trial

“Where Did These Votes Come From?”- Donald Trump Releases Statement On 2020 Election

May 11, 2021
We use cookies on our website to give you the most relevant experience by remembering your preferences and repeat visits. By clicking “Accept”, you consent to the use of ALL the cookies.
Do not sell my personal information.
Cookie settingsACCEPT
Manage consent