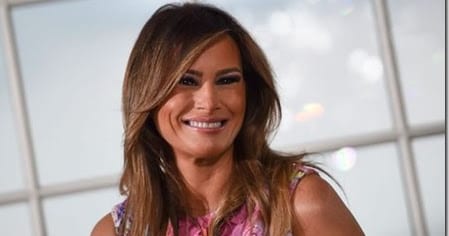 Former First Lady Melania Trump hammered the Mainstream Media over their “unhealthy obsession” with her.

From The Epoch Times:

“Mrs. Trump is no longer First Lady. She is a private citizen, mother, & wife. Sources in this article are not affiliated w her nor have insight into her thoughts or daily life. CNN’s FLOTUS Correspondent choosing to publish false gossip illustrates the media’s unhealthy obsession,” the office said in a recent social media statement.

The CNN report cited several people in claiming Trump’s daily life since leaving office has had nothing to do with politics. One of the unnamed sources allegedly said the former first lady was disengaged from the impeachment trial of her husband, former President Donald Trump, which ended with his acquittal on Feb. 13.

Trump’s office, in addition to its criticism, shared a post by Women for Trump co-founder Amy Kremer, who wrote, “Why is it necessary to write a hit piece on Melania Trump after she has left the WH & is just trying to live her life in private, @KateBennett_DC ? Please, have some grace & leave her alone.”

The Mainstream Press is obsessed with her.

However, there is a much deeper point to be made here.

They aren’t just obsessed with her to get clicks.

They are obsessed with destroying Republicans they don’t like.

The Mainstream Media doesn’t feel they have smeared the Trumps enough so they continue to smear them.

Trump, First Lady Were Vaccinated at WH in January