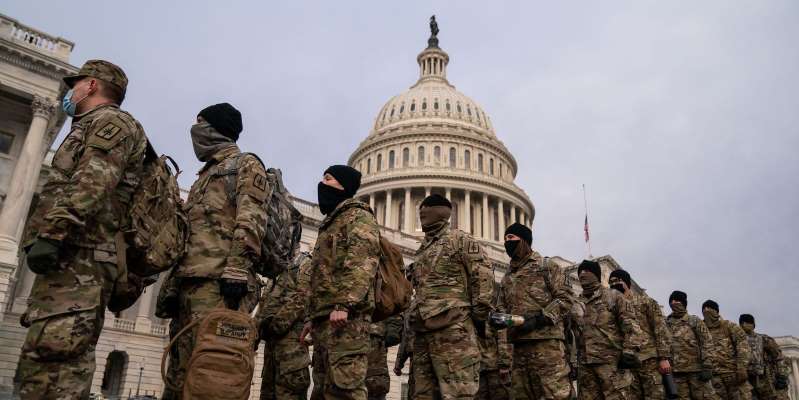 Reports coming out of Washington D.C. show that there is a massive troop presence in the capitol right now.

The bigger the military presence, the greater the tyrant.

Only criminals need the armed protection of 25,000 men to conduct a fake parade. A man of the people would never need this many armed guards.

This is definitely raising some questions in my mind though……

Why do you need that many troops to conduct some sort of virtual parade? There won’t be anyone there…..

I understand having some troops there, but 25,000 men? What’s REALLY going on here?

Here are the latest reports:

All for a virtual inauguration pic.twitter.com/s2xOlyzlmd

100 Percent Fed Up had more on the story:

The Pentagon is putting 20,000 National Guard on the streets of D.C. in the wake of the assault on the U.S. Capitol to support the Metropolitan Police Department and the U.S. Capitol Police for the inauguration on Jan. 20 of President-elect Joe Biden.

That is in addition to the more than 6,000 officers who are part of the U.S. Capitol Police and who are officers with the D.C. Metropolitan Police Department.

The more than 25,000 members of law enforcement personnel that are being deployed is five times the number of United States military deployed in Afghanistan and Iraq.

Democrat Mayor Muriel Bowser’s request from President Donald Trump for an emergency declaration ahead of the inauguration comes at the same time the Department of Defense said it would comply by Friday with Trump’s orders to draw down troops to 2,500 in each country.

To the 25,000 troops in DC: I was once like you. I know how you must feel. Make no mistake. They do not love you. They will discard you like trash once you’ve served their purpose. They will engage in profiteering, espionage, and no telling what else and they will get rich.

Why would we need 25,000 troops in DC if people thought the election was legit?

As Breitbart News reported, the DOD is meeting Trump’s January 15 deadline to draw down the number of troops in Iraq and Afghanistan to 2,500 in each country, according to the Pentagon. About 900 US troops will remain in Syria, multiple defense officials said.

Politico reported on the military buildup in the nation’s capital:

Law enforcement and defense officials have been scrambling to respond to the enhanced security concerns surrounding next week’s presidential inauguration in light of the Jan. 6 riot that took over the U.S. Capitol and left a number of people dead or injured.

President Trump Is Not Going to Drop the 2020 Election Fraud