Biden Accidentally Utters The “N” Word During Speech, Even Closed Captioning Picks it Up 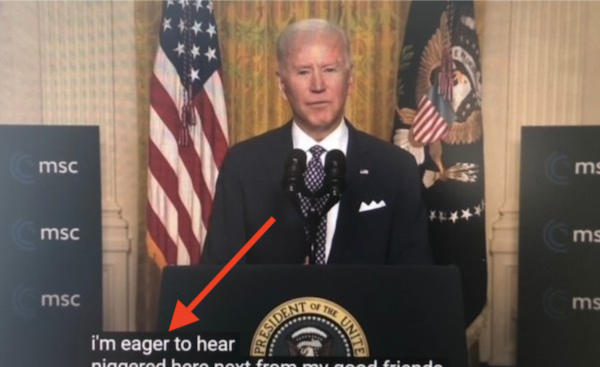 During a speech to the Virtual Munich Security Conference, President Joe Biden suffered his worst gaffe to date when he accidentally said the “N” word. The slip up was so bad that even the closed captioning picked it up.

“I’m either to hear, I’m eager to hear. (pause) Ni**er to hear, next from my good friends, and outstanding leaders, sanser(??) Merkel about her thoughts on the way forward together…” Biden said.

The gaffe was so bad that even the closed captioning picked it up.

Bidens gaffe’s and confusing comments are nothing new. While speaking with reporters on Friday, Biden gave a bizarre answer when he was asked if he would be visiting the state of Texas amid their energy crisis after they were hit by a strong winter storm.

Biden tried making an excuse for why his visit was delayed and ended up rambling about incoherent nonsense.

“When the president lands in any city in America, it has a long tail, and they’re working like the devil to take care of their folks,” he said.

Watch the clip below:

"When the president lands in any city in America, it has a long tail, and they're working like the devil to take care of their folks" https://t.co/9jLp1tjY62 pic.twitter.com/Xz5hc4yd55

Biden clearly doesn’t want to visit Texas given their current state and rather sit in the Oval Office. According to NPR, Biden spoke with Texas Gov. Greg Abbott about the state’s path forward.

President Biden said Friday he will sign a major disaster declaration that Texas Gov. Greg Abbott is requesting, which would open up broader federal aid for immediate and long-term recovery efforts in the state, including for both individual needs and public infrastructure.

Biden and Abbott spoke Thursday night regarding the response.

Texas has been at the mercy of an unprecedented winter storm, which has left many of the state’s residents without heat, power and potable water for several days. Several people, some homeless, have died in the freezing temperatures.

Biden said he wants to visit Texas, but does not want his visit to be a “burden” on recovery efforts. The president said he may decide early next week whether to go.

Earlier, the White House put out a list of nearly two dozen local officials in the state it had been in contact with this week regarding relief efforts.

One thought on “Biden Accidentally Utters The “N” Word During Speech, Even Closed Captioning Picks it Up”