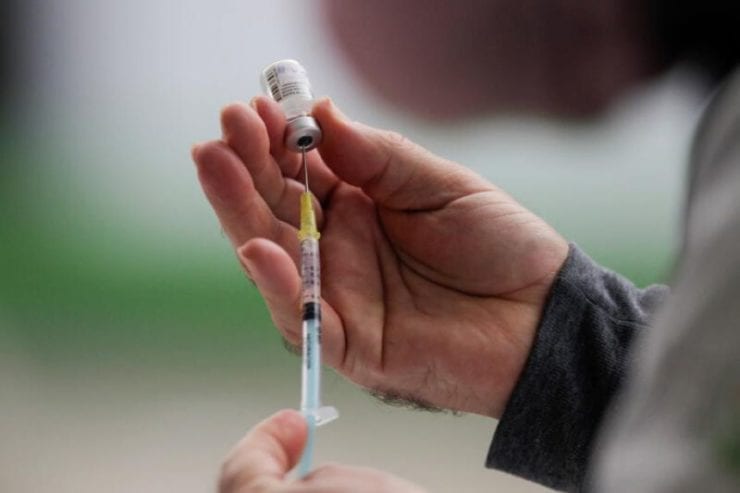 Can you remember a single time when a school was closed–not due to a virus, but due to the ‘vaccine’ meant to prevent the side effects of a virus?  Well, it is happening now, and few if any national outlets are reporting on it.

Vaccines have been around for hundreds of years, since Edward Jenner and Louis Pasteur.  However, not in anyone’s recent memory have vaccines caused the fantastic percentage of negative side effects as these new ‘novel’ and very experimental biological technologies being passed off as vaccines, today.  You are supposed to accept that because these new therapeutics are injected in a similar way to vaccines that they should be thought of the same way.  However, what is in the inoculations is quite different, and their biological mechanisms are much different as well.  This is completely unknown territory for humans, who are being used as guinea pigs on a global scale for these untested expensive novel technologies which have no long-term trials.  In fact, short-term testing is also often truncated or altered in favor of expedience.  And manufacturers are left with no responsibility for any negative side effects while keeping all their profits.

In fact, Dr. Fauci and Bill Gates are already planning to foist a third injection on everyone in order to combat a variant of the virus.  This is despite the fact that virus mutation is part of nature and not at all unique or particularly frightening with respect to the Wuhan CCP Virus, which has already had 100s of documented unremarkable variants requiring no special immunities.

Think it will end with a third shot even though mutations are endless?

Countless school systems across the country that have forced their staff to get injected with the two of these experimental shots have had to close temporarily due to their dramatic side effects.  The shots include the Moderna, Pfizer, and Johnson and Johnson experimental treatments.  This is unheard of for actual traditional vaccines.  Yet, a simple search on www.duckduckgo.com for the topic yields endless pages of results.  Below is a small list provided by The Red Elephants of schools forced to close.

If you know of additional school systems in similar situations, please let us know in the comments as this list is just a small sample size of the broader trend.

While most students and staff in Michiana are starting their week back at school, Edwardsburg Public Schools are not after several teachers saw reactions from their second dose of the COVID-19 vaccine.

“It’s been everything from nausea and vomiting, to fever, fatigue, a little bit of everything,” Superintendent Jim Knoll told 16 News Now.

“We didn’t have enough subs, we had a few too many who had symptoms,” Knoll says.

Two days after employees were given their first round of COVID-19 vaccinations, the Fairless Local School District canceled classes, attributing it to many developing side effects and becoming ill.

Colchester Elementary School was closed Monday because some teachers experienced some side effects after getting the coronavirus vaccine over the weekend and there was a lack of substitute teachers to fill in.

Supt. Jeffrey Burt said there was a vaccination clinic on Saturday and 17 Colchester Elementary School staff members, including nine who teach in core-area classrooms, who received the single-dose Johnson & Johnson vaccine had some side effects that kept them out of work today.

Grayson County Public Schools closed Monday because several of its employees were still recovering from their second doses of the COVID-19 vaccine.

“I was sick for about 8 or 10 hours; I was very fortunate, but also that I’ve got two board members in their late 60s early 70s, and they had nothing,” said Kelly Wilmore, the Grayson County Public Schools superintendent.

Sandy Creek Central School District didn’t have school on Thursday, but not because of too much snow.

The district superintendent told NewsChannel 9 that several employees who received the COVID-19 vaccine on Wednesday weren’t able to come to work on Thursday. The district used an emergency day for the closing.

An EMT who spoke with NewsChannel 9 a few weeks ago said he felt it.

“One of the biggest things to note is you’ll feel a bit weird for a few day afterwards,” said Evan Bailey.

As school teachers and staff get vaccinated against COVID-19, school districts have had to adjust their schedules to account for any potential side effects from the vaccines themselves.

An example of this came on Wednesday when Farwell Area Schools in Clare County closed for the day to allow its staff to rest and recover after receiving the second dose of the vaccine earlier this week. In a post on social media, the district said that the second dose can sometimes cause some “unpleasant symptoms.”

The school in rural Stark County announced the cancelation in a now-deleted Facebook post early Monday, saying they did not have enough staff to operate safely after many employees received the vaccine on Saturday.

According to the Facebook post, classes will resume on Tuesday. School officials did not answer phone calls.

By Monday afternoon the Facebook post had been removed, but not before drawing comments from many people.

Newark City Schools was forced to cancel classes on Thursday, a day after many of the staff received the second COVID-19 vaccine.

According to a tweet from the district, Newark schools closed Thursday because of a staffing shortage.

The Shepherd School District was shut down Thursday because a number of its staff were sick. But, not from a virus or bacteria. From a vaccination shot.

“Unfortunately we will need to call a snow day for tomorrow, Thursday, due to the district’s staff experiencing ill symptoms from their second dose of the Covid vaccine,” wrote Shepherd Superintendent Greg McMillan in an email. “Their will will be no on-line instruction.”

Alma and Ithaca schools were missing from the list of area districts closed due to weather.

It’s because they were already closed either due to a large number of staff calling out because of reactions to a second shot of the COVID-19 vaccine or because it was anticipation.

Alma announced the closure Feb. 16, anticipating that a large number of its employees would get their second dose over the weekend.

There are likely many more schools who have experienced the same reactions to all three types of Covid-19 Vaccines, but media outlets have not reported them

In an email obtained by TRE, STEPS Academy reported having similar issues with staff reactions. No media outlets have reported on the reactions STEPS staff experienced.