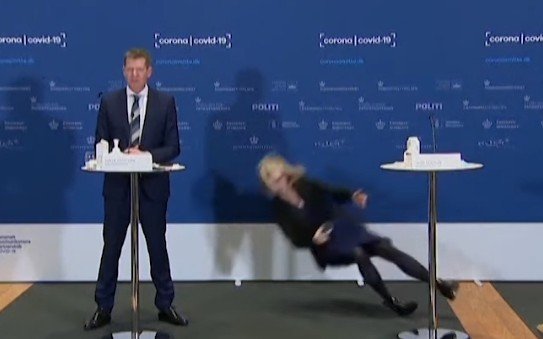 During a press conference, Denmark’s Head of Medicine Tanja Erichson collapsed while announcing the discontinuation of the Astra Zeneca COVID-19 vaccine in Denmark.

What she was supposed to announce before she collapsed was that Denmark has become the first European nation to discontinue the AstraZeneca vaccine due to reports of severe blood clots occurring in some of the recipients.

Take a look at the moment she went down:

On a side note, the AstraZeneca vaccine was heavily financed by the Bill and Melinda Gates Foundation.

Denmark has ceased giving the Oxford-AstraZeneca Covid vaccine amid concerns about rare cases of blood clots, the first European country to do so fully.

The move is expected to delay the country’s vaccination programme by several weeks.

Drug watchdog the European Medicines Agency last week announced a possible link with clots but said the risk of dying of Covid-19 was much greater.

Most have now resumed vaccinations with AstraZeneca, but often with limits to older age groups.

On Tuesday, the US, Canada and the European Union paused the Johnson & Johnson vaccine for similar reasons over clotting.

South Africa has also paused its use, despite the Johnson & Johnson being its preferred vaccine because of its effectiveness against the South African variant.

For both AstraZeneca and Johnson & Johnson, the blood clot side effects are extremely rare.

Somebody had to be first! Way to go Denmark. https://t.co/3cwrzDZo2k

Do you trust the COVID-19 vaccine at this point?