Don Jr. Speaks Out; “Here’s What Comes Next For Our Amazing Movement” 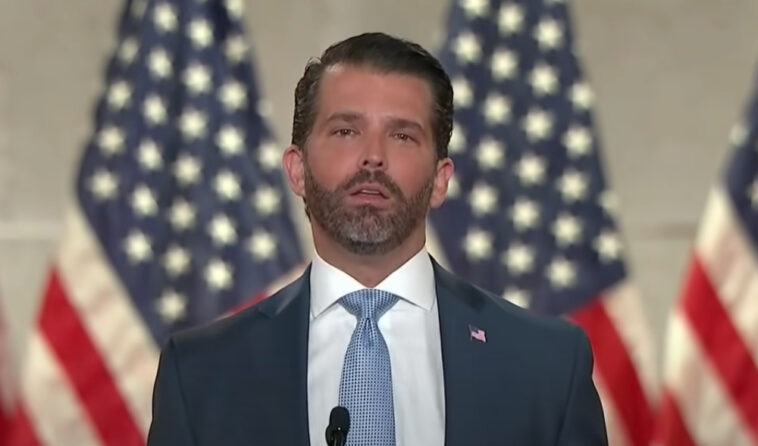 One of the most sought-after pieces of information in the immediate post-President Donald Trump era is what he’s going to do next.

Will he run again in 2024, all the wiser to the graft and corruption that kept him from victory this past election? Will he be content to play the role of kingmaker by forcing GOP candidates and incumbents to kiss his ring in exchange for his blessing and support? Will he forge a third party and wipe out Democrats and establishment Republicans in the process?

Donald Trump Jr. has some insight he just discussed.

In a video posted to his social media accounts, Don Jr. said for now, the former president would continue to push his highly successful policy prescription and turn it into “a movement of the people … against the elite.”

He went on to show a clip of his father on the golf course interacting with someone who thanked him for his service. “We haven’t finished yet,” Trump can be heard telling the supporter.

The message comes as we haven’t heard much out of the former president in recent weeks, which is very likely strategic as he maintains silent running ahead of his sham second impeachment trial.

“A lot of those things have been brewing for quite some time. And that’s why for me I’m still standing engaged and we’re going to get in there and fight to elect people who really represent the people—people like you who have gone through so much,” said Don Jr., adding that his dad is still “going to be in that fight.”

“I know he’s still going to keep going. I know we’re up against a lot, we always have been,” Don Jr. said, adding that the former president is “going to be in there making sure that we have people who truly represent what America is all about.”

Don Jr. then railed at the blatant bias and hypocrisy of social media.

“When I look at things that I put up on my social media that are totally objective or that are satire, one or the other, that [social media content] gets fact-checked so that they can use that to knock my platform, to prevent me from getting any kind of reach,” he said. “I see that stuff on a daily basis, I don’t see that on the other side. I don’t see Joe Biden getting fact-checked when he said he’s not going to ban fracking when he bans fracking.”

“If there’s even a little bit of ambiguity they get the benefit of the doubt, whereas if there’s even a little bit, a modicum, something like I said, subjective, who’s to know what the fact checker’s thinking, but certainly I know what I’m thinking and I can come up with a parameter that makes everything correct but the fact-checkers can say that it falls outside of those lines.

“Joe Biden, not one tweet—as many incorrect ones that they’ve put out—has been fact-checked. It’s truly sick,” Don Jr. added.

Donald Trump Jr: There are ‘plenty’ of GOP incumbents who should be challenged

2 thoughts on “Don Jr. Speaks Out; “Here’s What Comes Next For Our Amazing Movement””