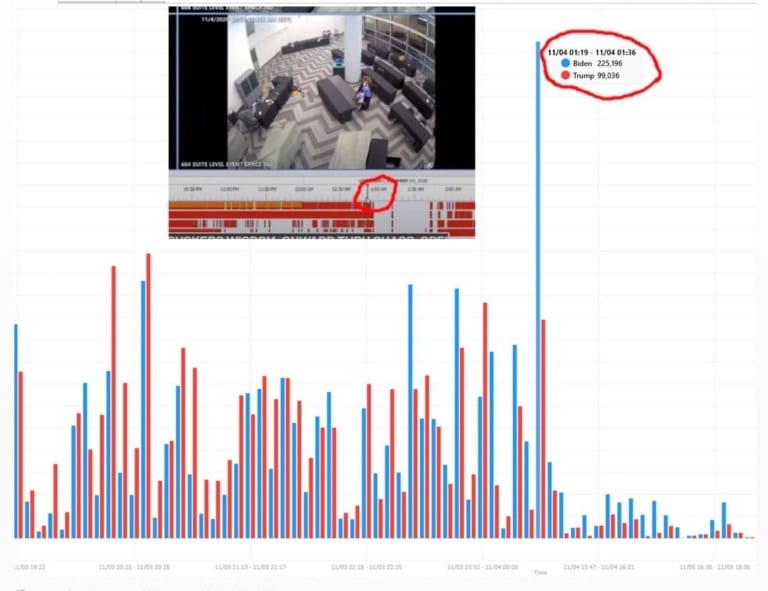 Vote tabulation data shows a massive spike in votes for Joe Biden during the time poll workers were told to leave yet some stayed behind to count votes for two hours.

This is just another example of how bombshell this video is.

It raises a lot of questions:

Why is it that the most votes were tabulated during this time?

Why was it that they were so overwhelmingly for Biden?

There seems to be enough votes cast during this time to flip the state.

Video footage from a Georgia Tabulation center has been released showing suitcases full of ballots being pulled out from under the table after poll workers were told to leave by supervisors.

Ballots were then counted.

WATCH: Video footage from Georgia shows suitcases filled with ballots pulled from under a table AFTER supervisors told poll workers to leave room and 4 people stayed behind to keep counting votes pic.twitter.com/AcbTI1pxn4

Turn on the Rudy hearing in Georgia You see the video just played? Republicans were told to leave ballot counting at 10:25 and at midnight “workers” came back, pulled a SUITCASE out from under table (stacked with ballots) and started scanning. Busted on camera. Holy heck. pic.twitter.com/MB64XBBsE2

🚨GEORGIA Ballot counting center video footage shows:
— Lady telling Republican watchers (and everyone) to leave for the night
— A group of 4 or so staying behind
— Ballots being PULLED OUT from under a table and counting CONTINUING with no witnesses.https://t.co/hTtbfZffwc pic.twitter.com/CttwYiZEHp

Despite orders for poll watchers to depart the counting facility, four individuals stayed behind to pull the suitcases out from underneath the table and continued counting the contents inside.

The video, according to the individual explaining the footage during the Georgia Senate Judiciary subcommittee election hearing, shows that the same person who hid the four suitcases ordered poll watchers to leave “under the pretense that we’re going to stop counting.”

Looks like the no evidence of fraud crowd is in trouble.

Every day we get better and better evidence.

-Ballots in Georgia were hidden in suitcases

One thought on “Georgia: Massive Spike In Biden Votes During Suitcasegate”