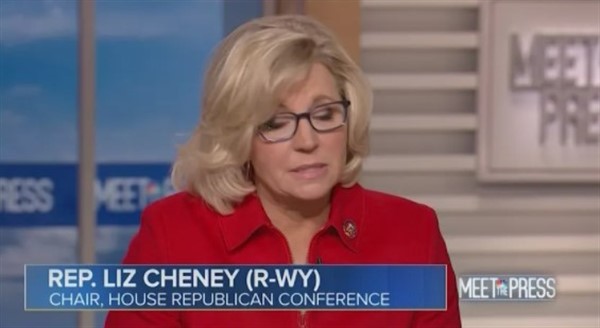 Rep. Liz Cheney may have won over the entire establishment media when she joined House Democrats to impeach President Trump but her move isn’t going over well in her home state.

Cheney is facing blowback from constituents who didn’t send her to Washington to join the war against Trump and has now been censured by the Republican committee in one Wyoming County for her actions.

The censure measure by Carbon County’s Republican Party Central Committee passed unanimously with the body calling for Rep. Cheney to appear in order to explain her actions.

According to Carbon County GOP Chairman Joey Correnti IV, “Our representative did not represent our voice,” leading to suggestions that Cheney will face a primary challenge in 2022.

Cheney is the daughter of former vice president Dick Cheney, a bloodthirsty warmonger who as a member of the George W. Bush administration, put into place the mass surveillance apparatus that was then used by Barack Obama to spy on Trump and his transition team.

"The censure resolution passed in a unanimous vote by the 45-member central committee."

Washington Times: Liz Cheney censured in Wyoming for vote to impeach Trump: 'Did not represent our voice' https://t.co/qJHJek8zGm

Via The Washington Times, “Liz Cheney censured in Wyoming for vote to impeach Trump: ‘Did not represent our voice’”:

The resolution condemns Ms. Cheney for conduct described as defying the will of most Wyoming Republican voters and joining in a rushed impeachment that did not examine all the facts and denied Mr. Trump due process.

​The resolution also declared that a “vocal majority of Wyoming Republicans recognize there were significant irregularities” in the Nov. 3 presidential election.

Accusations of ballot fraud and election irregularities were the basis for the Jan. 6 pro-Trump rally that became a deadly assault on the U.S. Capitol, temporarily halting the Electoral College vote count that affirmed President-elect Joseph R. Biden’s victory.

The censure is the latest blow to Ms. Cheney, a member of the House Republican leadership team and the daughter of former Vice President Richard B. Cheney.

The congresswoman who holds the number three spot for House GOP leadership has leadership ambitions now that Trump who was the impediment to more wars will be gone.

Cheney is the representative for Wyoming’s at-large congressional district, meaning she’s the state’s only member of the House of Representatives. Wyoming had a population of just under 579,000 as of 2019.

She currently serves as chair of the House Republican Conference but has faced calls to step down after her decision to vote for impeachment following the deadly Capitol riot. She was joined by nine other GOP members of Congress.

“The president of the United States summoned this mob, assembled the mob and lit the flame of this attack. Everything that followed was his doing. None of this would have happened without the president,” Cheney said in a statement before the vote.

Cheney’s alliance with Nancy Pelosi’s lynch mob has resulted in calls for her to either step down or for her leadership position to be revoked, she has refused and Republican House Minority Leader Kevin McCarthy has her back.

With Trump leaving D.C. and his supporters being hunted down by the federal government, Cheney represents the hopes of the corrupt Bush-Romney wing of the GOP to restore the status quo in the swamp but that may be a hard sell to many of the 74 + million Americans who voted for President Trump.