Mike Lindell Responds To Threatening Letter from Dominion Lawyer: “I want Dominion to put up their lawsuit because we have 100% evidence that China and other countries used their machines to steal the election” 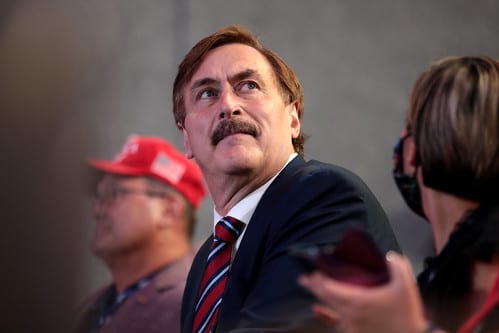 Dominion Voting Systems threatened My Pillow CEO Mike Lindell with a letter dated December 23, 2020, from defamation lawyers. In the letter, Dominion lawyer Thomas A. Clare called Lindell’s attacks on the voting company used in all six contested states “implausible,” adding they have “no basis in reality.” Mike Lindell is not the only person who received a threatening letter from Dominion—at least one GOP poll challenger in Michigan (who never even mentioned Dominion in her affidavit) received a threatening letter from Dominion.

Mike Lindell, a devout Christian, is not worried about a letter from Dominion lawyers threatening defamation. Like President Trump, Lindell is a fighter and is vowing to fight back, telling Axios that he’s looking forward to Dominion’s lawsuit. “I want Dominion to put up their lawsuit because we have 100% evidence that China and other countries used their machines to steal the election.”

Mike Lindell spoke with RSB Network today, where he demanded that he has “100% evidence that China and other countries” took our whole election, adding, “I’ve seen it, I have access to it.”

Lindell explains that every person in America needs to see the evidence he has, regardless of party. “This wasn’t just one country,” Lindell explained.

Lindell also told the RSBN reporter that Bed Bath and Beyond, Costco and Kohls have just dropped sales for his products in their stores over his support for voter fraud to be revealed.

“God’s in control,” Mike explained, telling everyone to “get in prayer!”

3 thoughts on “Mike Lindell Responds To Threatening Letter from Dominion Lawyer: “I want Dominion to put up their lawsuit because we have 100% evidence that China and other countries used their machines to steal the election””