Newsmax Anchor Begs Producers to ‘Get Out’ of Mike Lindell Interview 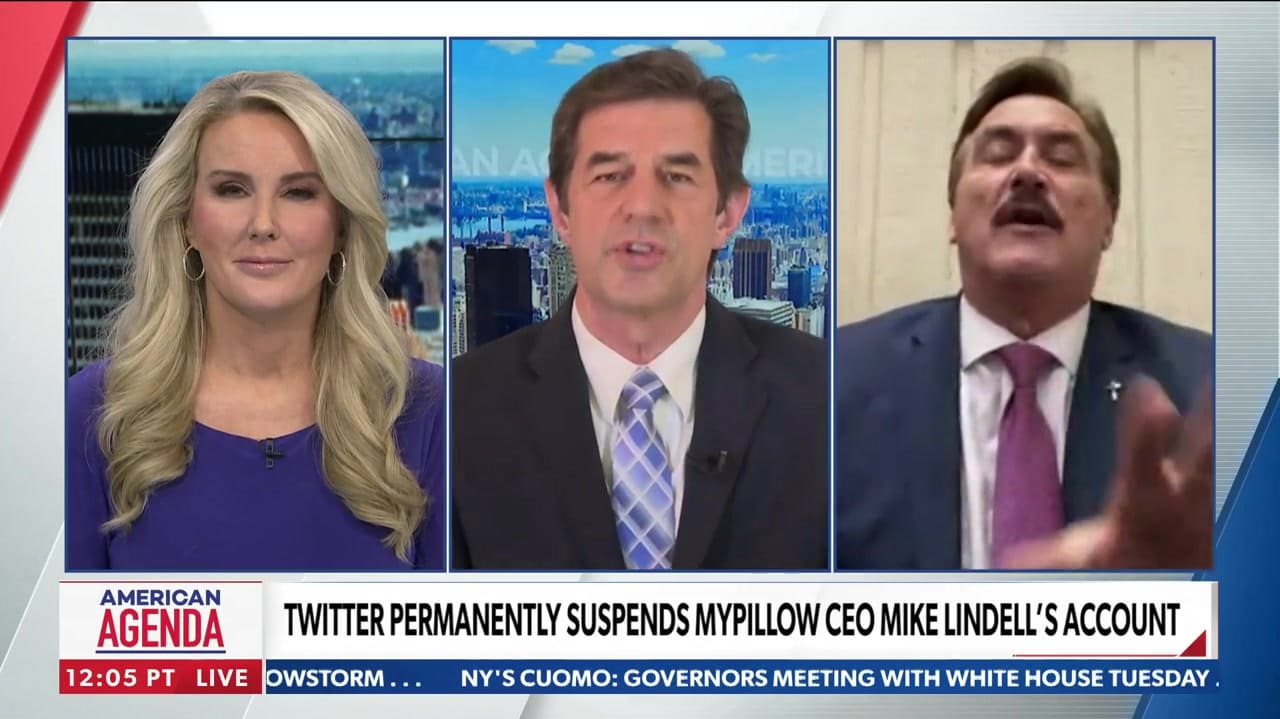 Anchor Bob Sellers, likely aware of the legal implications, literally stood up from his seat and walked off set as Mike Lindell continued about Dominion voter fraud allegations.

A Newsmax interview with conspiracy-peddling MyPillow CEO Mike Lindell went completely off the rails on Tuesday when Lindell immediately began pushing baseless and debunked claims about Dominion Voting Systems, prompting anchor Bob Sellers and Heather Childers to repeatedly cut him off and Sellers to literally walk off the set.

Lindell ostensibly appeared on the pro-Trump conservative network to discuss Twitter’s decision to permanently kick him off its platform for spreading election conspiracies. Earlier this week, Twitter also suspended his company’s account after Lindell tried to use it to get around his ban.

After anchor Heather Childers asked him what happened to his Twitter account, Lindell—who is facing pending litigation from Dominion over voter fraud claims—quickly began shouting that he was banned because he has “100 percent proof” of all the “election fraud with these Dominion machines.”

Sellers, obviously aware that his network has already received letters from Dominion lawyers warning of their intent to sue over Dominion lies, immediately interjected and cut off the ranting Lindell.

“Mike, Mike… you’re talking about machines… that we at Newsmax have not been able to verify any of those kinds of allegations,” Sellers said over an animated and talking Lindell. “We just want to let people know that there’s nothing substantive that we’ve seen.”

At this point, during a segment on “cancel culture,” the control room apparently turned the MyPillow guy’s microphone down as Sellers then began to read a prepared statement that Newsmax had accepted the results of the election as “legal and certified,” all as Lindell kept shouting.

Sellers, hilariously, attempted to get the interview back on track, asking Lindell about whether or not his Twitter ban could be temporary. Lindell, however, was having none of it and continued to blather on about voting machines and election fraud.

“Can I ask our producers—can we get out of here, please?” Sellers begged as Lindell kept going on. “I don’t want to have to keep going over this,” the anchor added. “Newsmax has not been able to verify any of those allegations.”

As Lindell shouted at Sellers that “you are as bad as Twitter,” the Newsmax anchor literally got up from his seat and walked off set, leaving Childers to go it alone with the angry pillow salesman. Lindell—who helped bankroll Donald Trump’s futile legal efforts to overthrow the election—tried once more to get in his crazed conspiracies, prompting Childers to jump in and wrap up the interview early.

This isn’t the first time Newsmax has cut off Lindell after he tried to push his baseless voting machine allegations. On the same day that Newsmax forced its anchors to read a fact-checking statement debunking the network’s bogus voting machine claims following a legal threat, guest host Sebastian Gorka stopped Lindell in his tracks when he tried to go down that road during an interview.

“Mike, Mike, we’re not going to get into the minutiae of the details,” Gorka said during the Dec. 21 segment before steering Lindell onto safer ground.