Vaccines may end the COVID-19 pandemic by July, but not as you think 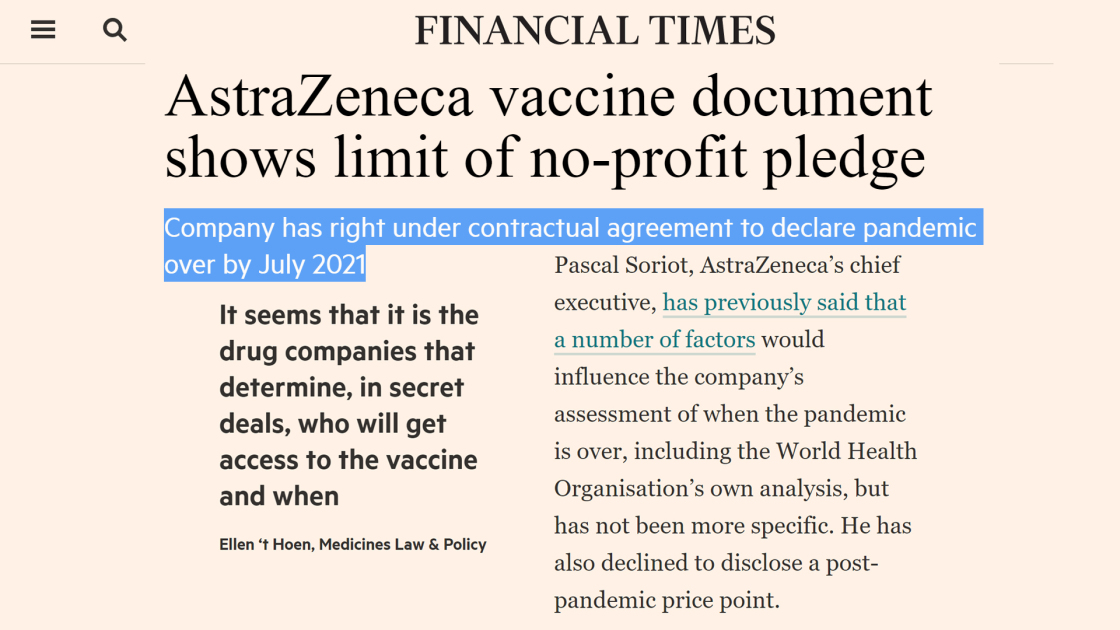 We found a contractual clause between governments and Covid jabs manufacturers that may end the pandemic no later than this summer.

AstraZeneca, which has promised not to profit from its Covid-19 vaccine “during the pandemic”, has the right to declare an end to the pandemic as soon as July next year, according to a document seen by the Financial Times.

“A key element of Oxford’s partnership with AstraZeneca is the joint commitment to provide the vaccine on a not-for-profit basis for the duration of the pandemic across the world, and in perpetuity to low- and middle-income countries. “

Also, according to Sky News Australia, “AstraZeneca has committed that the vaccine will be made on a not-for-profit basis as long as COVID-19 is classified as a pandemic, and will remain so when sold to developing nations.
Should the disease recede and the vaccine become an annual defence against COVID-19 sold at a profit, Professor Gilbert, her close colleagues, the university, and a range of private and corporate investors – including Google’s parent company Alphabet – all stand to benefit.”

Note that AstraZeneca is a member of the World Economic Forum (think The Great Reset), same as Pfizer, Moderna and J&J, and Google is a shareholder, so they have amassed more support than a country can raise.

These claims are also supported by their main partners in AstraZeneca, Oxford Science Innovation, who says:

“In the interest of accelerating global vaccine development, Vaccitech assigned its rights to the vaccine candidate to Oxford University Innovation, to facilitate the license of those rights to AstraZeneca for the development and manufacture of the vaccine. None of the parties will profit from vaccine sales during the pandemic.

If they open in summer, they will lose even more customers and they can’t use the emergency situation excuse to inject people with hazardous untested chemicals like these mRNA jabs.

This is what obliges Google and the Gang to ramp up censorship and propaganda.

So now Pharmafia insiders (lower level salesmen) inform us that the powers behind these covid jabs are pressuring governments to end the pandemic and start the payments. But that’s hardly achievable and politicians find themselves between a rock and a hard place.

We’ve said before that this state of emergency has no end in sight because it’s a necessary condition for injecting experimental garbage into the gullible masses. It was mostly true but we’ve already corrected that statement because this new revelation might just bring that end.

Some governments may be able to win a few extra-months, but it’s very likely that many will not have that power and will do whatever stunt necessary to please their Pharmafia overlords.

This is how you may explain the unexplainable recent plunge in case stats too.

As we showed before, they have a knob that can control the stats: the PCR test cycle threshold. The higher, the more positive results.

As the pandemic was scheduled to ease and the covid business to normalize after Biden/WEF’s hostile takeover of US Government, WHO ordered lowering the threshold precisely on Biden’s inauguration day and these are the immediate results. Which also proves how they pumped up the numbers before.

<<While some companies said from the outset they can only develop the vaccine for profit, others, such as AstraZeneca and Johnson & Johnson, have agreed to provide doses on a cost basis for at least as long as the pandemic lasts.

The memorandum of understanding, seen by the FT, outlines the conditions of a deal signed in July between AstraZeneca and Fiocruz, a Brazilian public health institution, to produce at least 100m vaccine doses, worth more than $300m.

The document states that for the purposes of the MoU and the “Definitive Agreements” the pandemic will be considered over on July 1, 2021. The so-called “Pandemic Period” could be extended but only if “AstraZeneca acting in good faith considers that the SARS-COV-2 pandemic is not over”, it says.

Pascal Soriot, AstraZeneca’s chief executive, has previously said that a number of factors would influence the company’s assessment of when the pandemic is over, including the World Health Organisation’s own analysis, but has not been more specific. He has also declined to disclose a post-pandemic price point.

The WHO declared the current outbreak a pandemic in March. More than 1m have died and cases globally show no sign of tapering. Even optimistic forecasts predict an approved vaccine is unlikely to be widely available for public vaccination campaigns before the middle of next year.

AstraZeneca declined to answer specific questions regarding its definition of the “Pandemic Period” or the Fiocruz agreement.

“From the outset, AstraZeneca’s approach has been to treat the development of the vaccine as a response to a global public health emergency, not a commercial opportunity,” the company said in a statement. “We continue to operate in that public spirit and we will seek expert guidance, including from global organizations, as to when we can say that the pandemic is behind us.”

Oxford university also declined to respond to specific questions. “The terms of our agreement are confidential but uphold Oxford’s commitment to fair and equitable access to the vaccine for the duration of the pandemic should it prove to be effective in our global phase 3 clinical trials,” the university said.

Public health experts say many of the vaccine deals, including those involving AstraZeneca, are shrouded in secrecy, offering little room for scrutiny.

Manuel Martin, medical innovation and access policy adviser at Médecins Sans Frontières, said the terms of the Fiocruz MoU gave AstraZeneca “an unacceptable level of control over a vaccine developed through public funds.” “Relying on voluntary measures by pharmaceutical corporations to ensure access is a mistake with fatal consequences,” he said.

AstraZeneca has received large amounts of public money to develop its vaccine and secure forward orders, including at least $1bn from the US. Supply deals to date indicate that the vaccine, which requires two doses, is priced at about $3 to $4 per dose, lower than the prices disclosed or reported for other potential vaccines.

Ellen Hoen, director of Medicines Law & Policy, a non-profit campaigning for greater access to medicines, said more transparency was needed.
“Despite all the talk about the Covid-19 vaccine needing to be a ‘global public good’ by political leaders who spend billions on Covid-19 R&D, it seems that it is the drug companies that determine, in secret deals, who will get access to the vaccine and when,” she said.>>

If this trend keeps going on a bit longer, it very likely means that they are staying on the course and many countries will officially end the pandemic starting June/July.

And that will force them do more stupid stunts we can’t wait to expose.
They already are stumbling at all levels, from production and distribution to research. Last minute news from Financial Times inform that “Scientists are demanding to know why AstraZeneca’s paused trial of its Covid-19 vaccine is still on hold in the US while it has been restarted elsewhere, worrying it could damage public trust there. The trial was originally halted because a UK participant developed a serious inflammatory condition. In the US, it has been on hold for almost two weeks, while trials in other countries including the UK have restarted.

Ashish Jha, dean of the school of public health at Brown University, said:

“Normally, companies wouldn’t give out information in the middle of a trial, but this is an exceptional case and we need to have radical transparency. Otherwise, there is a risk the public will lose confidence in the whole process.”

AstraZeneca is telling participants in resumed trials that the “unexplained neurological symptoms” were either unlikely to be associated with the vaccine or that there was “insufficient evidence” to say whether they were or were not associated, and so independent reviewers had recommended that vaccinations continue. Clinical trials do not usually publish data before hitting pre-determined milestones.”

LAST MINUTE UPDATE: This came in hours after we published this. Ah, well…

As a side note: watch the video from the above source and everything featuring Fauci this year and tell me he didn’t have better energy and mood during Trump’s mandate. I blame that on the fact that Trump was the best pro-vaccine campaigner they had and now that he’s gone from the screens, they’re in shambles. But that’s just me.

One thought on “Vaccines may end the COVID-19 pandemic by July, but not as you think”