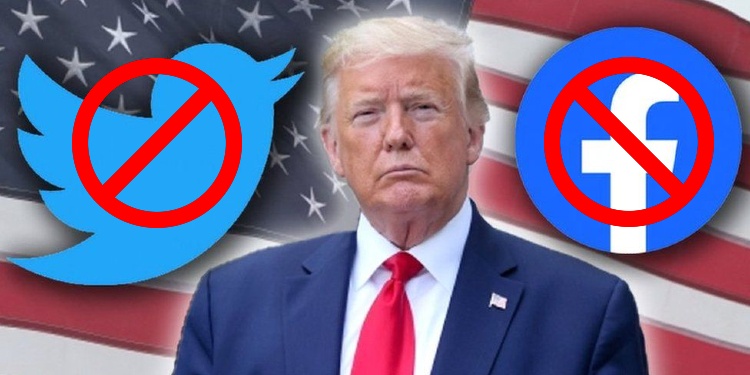 The rise of Big Trump: free-speech Trump Cloud infrastructure or a Trump-backed search engine or…

With the advent of social media and the digital era, there has arisen a striation of our society fueled by technological achievements in information science. Smartphones, social media, streaming content, the internet of things, et cetera, have made big tech companies efficient assembly lines for manufacturing the world’s daily reality, and it has given them a massive bullhorn with which to broadcast it.

To that portion of the globe that are yet able to discern both sides of the picture, it is clear that we are presently in a modern War of the Worlds. This is evident in the Orson Wellesian effect that fictional narratives such as the COVID hysteria are having on today’s society. Such power is unashamedly utilized to great effect in obscuring any intolerable exposition of truth, the collusion of big tech oligarchs to censor, de-platform, and literally pull the plug on any who would call attention to the blatant theft of the 2020 Presidential election being but one appalling example.

To his credit, Donald Trump has done much to draw back the curtain on such narrative necromancy, if little to counteract it. The tangled web of tech is woven profoundly into the matrix of our essential digital infrastructure. At the highest level, applications of every sort make it sinfully simple to censor, propagandize, and spy on the everyday citizen. To counteract this, many have speculated that a new social media platform deployed or directed under the auspices of Donald Trump would be effective. But would such a platform in and of itself be capable of withstanding fiendish attacks from the lower levels of the digital underworld?

As we have seen in the case of Parler, a free speech platform that would combat the Orwellian censorship of competitors like Twitter and Facebook is only viable if the infrastructure upon which it resides is also free of such equally malicious architects of doom. Likewise, it is interesting to speculate that even apps like Telegram that market themselves as an un-censorable alternative to mainstream social media inevitably rely on the veritable malware that is Android and iOS in order to function, nor does it take into account the reality that those running such apps will simply never command the level of trust that The Donald would from prospective patriotic end-users.

And even were we to speculate further and consider the widespread availability of an autonomous, state-of-the-art Trumphone, made in America, entirely cleansed of the filthy touch of Big Tech, would not the communications structure upon which it relied, say 5G for example, render it equally vulnerable? It is certainly interesting to contemplate the rise of Big Trump. The product possibilities are endless, with enterprises like free-speech Trump Cloud infrastructure or a Trump-backed search engine being but the tip of the iceberg. Undoubtedly, there is a massive preexisting market in America for such noble business ventures, but is such support enough to withstand its ruthless, power hungry competitors’ inevitable assault? Would millions of pre-orders and massive pro-Trump crowdsourcing be sufficient to render such an undertaking a success

Trump himself certainly has no aversion to similarly risky undertakings, a fearlessness which lingers conspicuously among his many admirable qualities. Who could argue that the failure of the Trump-backed USFL as an alternative to the unwatchable sideshow that is today’s NFL would certainly have greater prospects for success now than it did 40 years ago?

The shrieking of technology overlords in response to such Trumpian tactics would undoubtedly serve as a call for legislative reinforcements to vigorously counter attack, pushing the present anti-Trump regime in Washington to measures that would rival China or North Korea in their draconianness. In such cases, it would be necessary for Trump-allied state legislatures to man the ramparts with every available defensive weapon. Though the outcome of such a political fight is up for debate, the battle would certainly be of epic proportions.

To date, Trump has yet to tip his hand as to any possible plans for the creation of a new and improved digital empire, but the giant boot heel of Big Tech stands firmly on the necks of the American people nonetheless, and without the herculean strength of Big Trump populism, it will be virtually impossible to throw off.