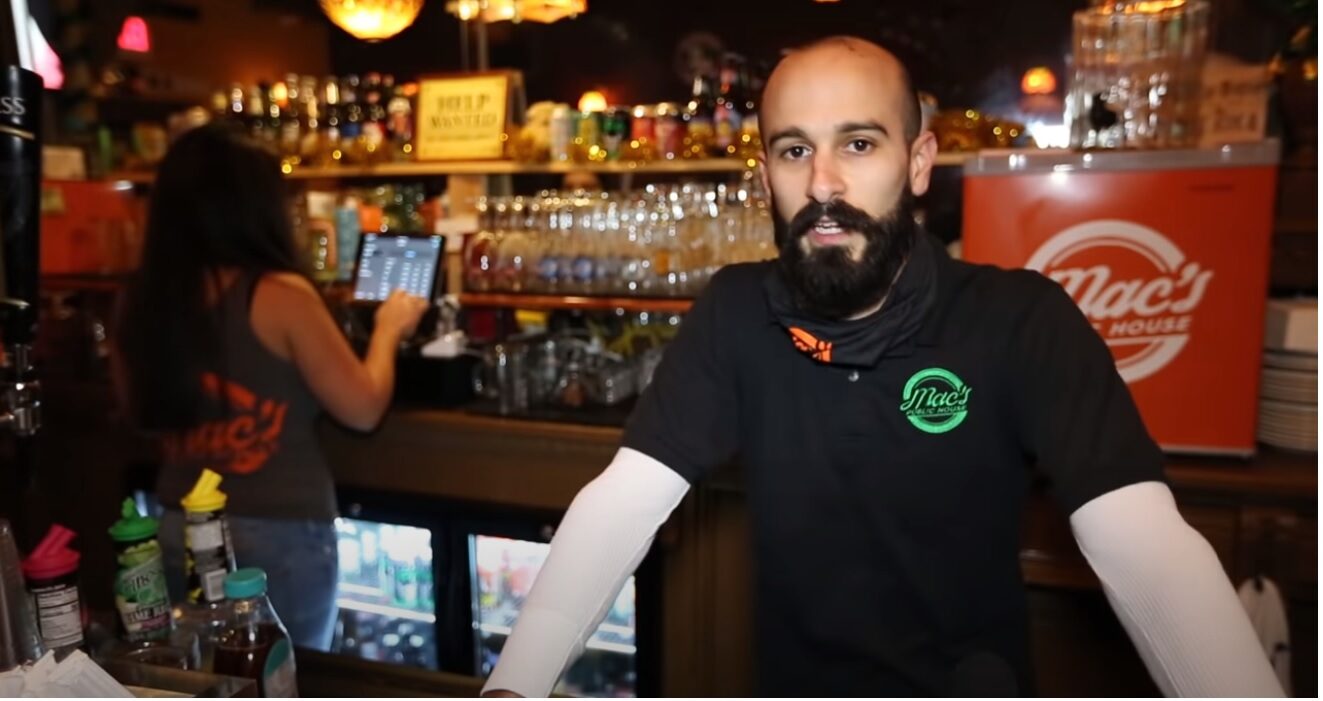 Two New York City businessmen have taken a page from the leftist playbook for defying government, and have declared their pub an “autonomous zone” in order to keep its doors open.

The New York Post reported Staten Island’s Mac’s Public House is open, which is in defiance of public health orders to partially close down amid a resurgence of reported infections amid the coronavirus pandemic. It’s quite a story…

Cuomo, a recent Emmy Award recipient for his “leadership” during the pandemic, declared the area to be zoned orange this past week.

According to New York City’s website, orange is bad — meaning “restaurants, bars, cafes and other food service establishments can provide outdoor dining and takeout and delivery service only.”

Orange also means a “four-person maximum per table,” while “No indoor dining is allowed.”

But Mac’s Public House co-owners Danny Presti and Keith McAlarney told the Post they won’t be closing the doors to their business.

Taking a cue from Seattle’s leftist Capital Hill neighborhood occupiers from this past summer, the two men declared the establishment an “autonomous zone.”

That seemed to work out for Seattle’s CHAZ/CHOP anarchists and other leftists, as they were allowed by Seattle Democrats to operate under their own rules for roughly a month.

There were sadly multiple causalities.

But Mac’s is a peaceful independent nation/pub, and freedom is on the menu, as are reasonably priced cheese-filled jalapeño poppers.

And unlike the former leaders of CHOP, Presti and McAlarney don’t seem intent on committing any egregious crimes.

They’re fighting leftists like the left, adopting a “come and get me” approach to protesting perceived injustice.

So far, the men have been hit with thousands of dollars in fines and have had their business liquor license revoked.

Neither man seems particularly afraid of the city, or its fines, though.

The men have posted a video on YouTube to update patrons on the status of their business.

They’re offering free food and drinks to guests in return for donations — apparently seeking to take advantage of a loophole which would potentially make them no longer a business, so long as they don’t receive cash directly for goods and service.

But the city expects them to pay dearly with fines.

On the issue of the mounting fines, Presti didn’t seem too concerned

“At this point, we’re OK with it, because we’re not paying it,” he said.

“[The Sheriff’s Department] is issuing us $1,000 fines, so they keep coming back. We’re still here. We’re not letting them in,” he added.

McAlarney, citing private property laws in a YouTube video, was quite clear that Mac’s Public House will remain open.

“You want to come down here and pull that license off the wall?” the man taunted Cuomo.

In a video appeal to the mayor, McAlarney said, “Feel free to end up coming down, and we’ll end up having a conversation before you even think about stepping foot on my property. I will not back down.”

New Yorkers have been hit hard by not only the coronavirus pandemic, but by their Democratic leadership’s overreaction to it.

The proprietors of Mac’s Public House aren’t giving in to the city’s demands — not with regard to locking up and going home.

Democrats have officially become so anti-small-business that opening up your doors to customers is now officially a crime in Staten Island.

McAlarney and Presti aren’t playing along.

Join The Battle and Fight side by side with Mac’s
Go Fund Me https://www.gofundme.com/f/mac039s-su…
Merch! https://www.newyorkevl.com

On Saturday November 28th 2020, Mac’s Public House (Grant City, Staten Island) was visited by multiple vehicles full of Sheriffs and member of a New York State Governing Board. This activity of being bullied by City and State officials, multiple times a day have become the norm for the business. This visit occurred on what happens to be “Small Business Day”. Many of the politicians supporting the shut down mandates on these small businesses are the same ones having them endlessly harassed when the cameras aren’t rolling. Andrew Cuomo may tweet and post about supporting the small businesses of New York State, but we assure you this Governor is all about extorting them via every agency he can. Luckily, this time, the cameras were rolling. The message is clear. The line is drawn in the sand. Mac’s Public House will not bow. The story was picked up by the NY Post and within an hour Fox News. The phone at Mac’s is ringing off the hook with love and support from around the entire country. Calls poured in from Texas, Alabama, California and more… There will be ways to show your support in this fight. We ask that you follow @MacsPublicHouse on instagram for details coming soon. Follow the production company @MattoosEntertainment on instagram as well for new videos and more about businesses that will begin to reopen. ALL MEDIA OUTLETS, YOU HAVE MY PERMISSION TO USE THIS VIDEO ON ALL PLATFORMS. WE ONLY ASK TO BE CREDITED FOR IT (CREDIT: Mattoos Entertainment / Instagram: @MattoosEntertainment).

We are back with Episode 2, in what is now set to become a series following the movement of small businesses spear heading the fight for personal freedom and choice. The first video had brought attention to the initial $15,000 fine Mac’s received for operating their business. We ask the people to view how unions came about …Strength in numbers cannot be stressed enough. Together we can STOP the injustices being forced on us by power hungry Politicians. The attack on small businesses will not end, until they find themselves powerless in their attempts to drive us out of business. The power of leadership is a sword that can only be wielded by a leader who has the respect of their people. This is no longer the case. We will make our stand. We will not bow.

Vaccines may end the COVID-19 pandemic by July, but not as you think